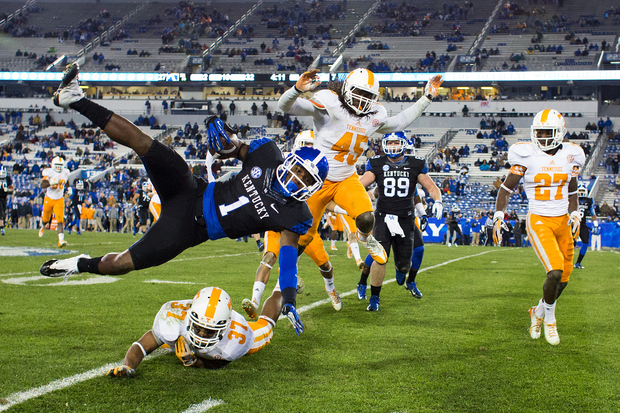 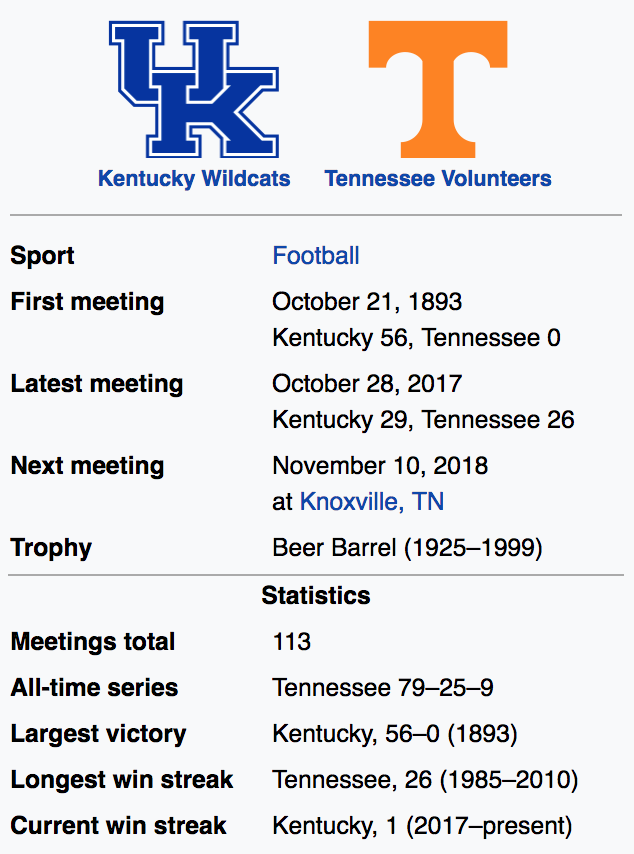 The Kentucky–Tennessee rivalry is a college sports rivalry between the University of Kentucky Wildcats and the University of Tennessee Volunteers. The rivalry between these two Southeastern Conference (SEC) schools, located about 173 miles (278 km) apart, dates to their first college football game in 1893, and has continued across all sports, with the men’s basketballseries gaining particular attention in recent years.

The football rivalry was once a trophy game known as the Battle for the Barrel, with the victors keeping a painted wooden beer barrel until the next contest. The barrel tradition was discontinued in 1998 following a fatal alcohol-related car crash involving two Kentucky football players.

Both schools were charter members of the Southeastern Conference when it was established in 1932. Since that season, Tennessee has a 53–14–3 record against Kentucky, including a streak of 26 straight victories from 1985 to 2010, which is one of the longest such streaks in NCAA history. The Wildcats did not win any games against the Volunteers during the 1940s, 1990s, or 2000s. The only decade of the SEC era in which UK posted a winning record against Tennessee was the 1950s, when they went 6–3–1. The series was not without disappointment even during that period for Kentucky fans, however, as the Vols dealt Bear Bryant‘s 1950 Wildcat squad their only defeat during their school-best 11–1 season.Tennessee and Kentucky have faced off on the gridiron since 1893, making it one of the oldest rivalries in major college football. It was close in the early years, with Kentucky holding a series lead after the first 22 match-ups. But since the early 1930s, Tennessee has dominated the cross-border rivalry.

History of the trophy

Like many college football rivalries, the Kentucky–Tennessee game once involved a trophy: a wooden beer barrel painted half blue and half orange which was awarded to the winner of the game every year from 1925 to 1997. The Barrel was introduced in 1925 by a group of former Kentucky students who wanted to create a material sign of their school’s supremacy in the rivalry. It was rolled onto the field that year with the words “Ice Water” painted on it to avoid any outcries over an alcohol drum symbolizing a college rivalry during the Prohibition era.

While the trophy was ceremonially awarded to the game’s winner each year, it took some unauthorized trips over the years. Tennessee lost to Kentucky in 1953, but several orange-clad students “keg-napped” the barrel and kept it hidden in Knoxville until UK students retaliated by “dog-napping” Smokey. The barrel theft set in motion a series of additional pranks over the next few years between students of the two schools, but the barrel was not involved.

Vanderbilt University students stole the keg from Kentucky in 1960 to rally support from cross-state UT students in an upcoming basketball game against Kentucky. The Commodores lost the game and returned the trophy months later.

End of the Barrel era

A fatal alcohol-related car crash involving two UK football players a week before the 1998 contest prompted the end of the barrel exchange. Kentucky athletic director C. M. Newton expressed the idea that the ongoing use of an alcohol container as a trophy would be inappropriate under the circumstances. The ceremony was cancelled for the 1998 game, and the two schools mutually agreed to permanently discontinue the tradition before the 1999 game.

The actual barrel was in UT’s possession when the schools ended the exchange, but its current whereabouts have not been made public. It has not been displayed since 1997, and it was not transferred to Kentucky when the Wildcats broke the Volunteers’ long series winning streak in 2011. 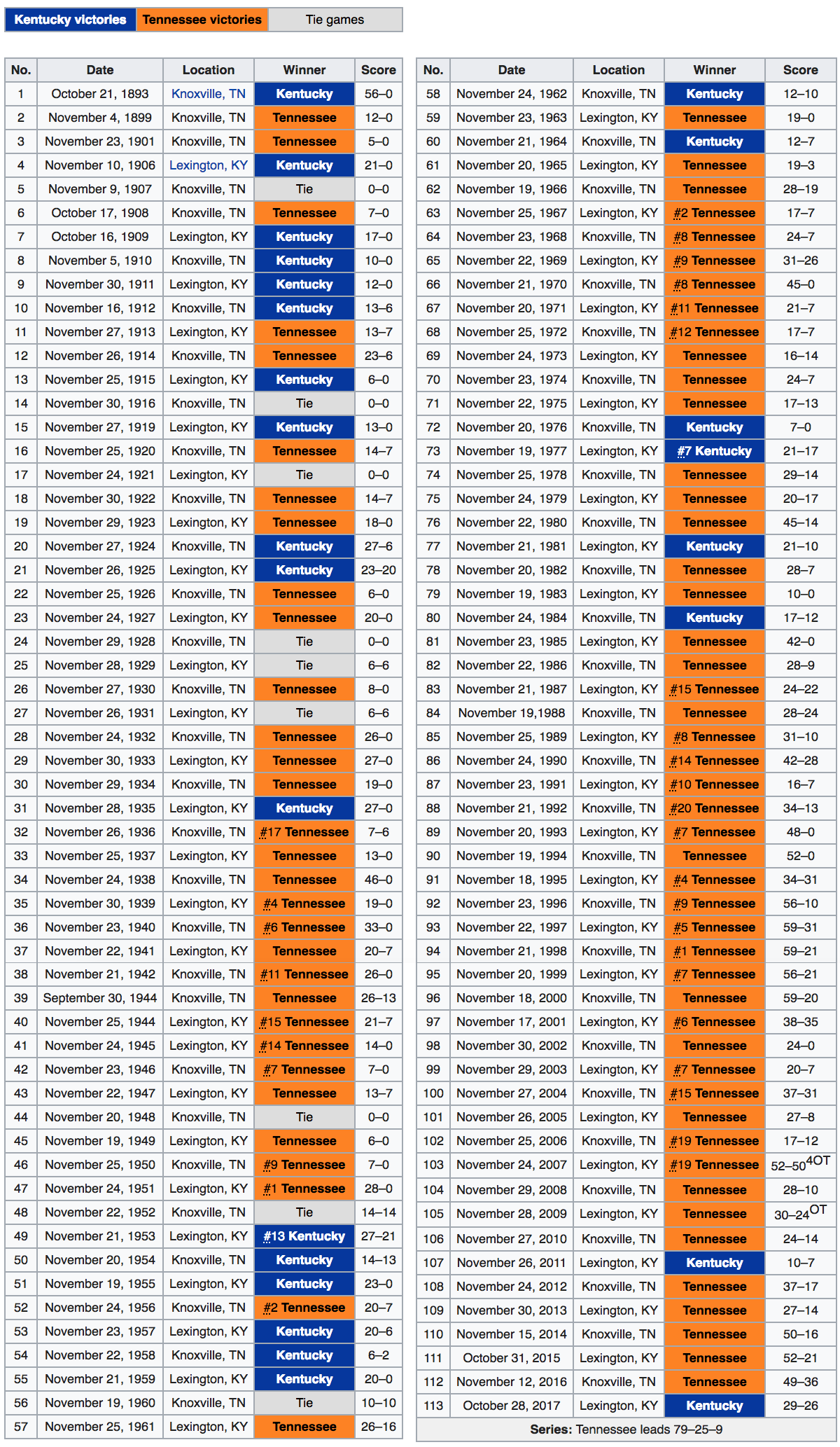 Notable games
1950: The Vols handed #3 Kentucky, coached by Bear Bryant, its only loss 7–0. Tennessee went on and defeated #2 Texas in the Cotton Bowl Classic 20–14 en route to an 11–1 record, and Kentucky defeated Oklahoma 13–7 in Sugar Bowl.

2007: Tennessee came to Lexington looking to clinch the SEC East and a trip to Atlanta after a strong victory over Georgia and Florida stumbling midway through the season. Kentucky came in with one of its strongest teams in years behind star QB Andre Woodson and a huge upset over then-ranked #1 LSU now looking to end the 22-game losing streak to the Volunteers. The game becomes a fierce, nail-biting, overtime thriller as Woodson fights to end Kentucky’s misery against Tennessee. In the second overtime Tennessee fails to score giving Kentucky a chance to finally end the streak, but the Cats field goal would be blocked. With the score at 44–44 an unsportsmanlike penalty on UT RB Arian Foster would force Tennessee to start the fourth overtime from the UK 40-yard line, but it would be rendered moot as QB Erik Ainge hits WR Quintin Hancock with a touchdown strike on the first play. Tennessee would make the two-point conversion. On Kentucky’s possession RB Derrick Locke scores from three yards out to bring Kentucky within a two-point conversion to keep the game alive. Woodson would keep the ball himself on the try, but would be stopped from behind short of the goal line for the Volunteer victory. After the game, Tennessee and Georgia finished their seasons with identical 6–2 records to lead the SEC East, but the Vols would move on to the SEC title game by virtue of the head-to-head tiebreaker over the Bulldogs. Tennessee would then lose the following week to the eventual two-loss national champion LSU.

2008: Phillip Fulmer’s final game as Tennessee’s head coach. Fulmer finishes his career off with his final victory over the Wildcats, 28–10, leaving Kentucky winless against Fulmer.

2009: Tennessee and Kentucky go to overtime once again after another nail-biting game ends tied at 24–24 in regulation. Kentucky relied on star receiver Randall Cobb for most of the game, however Cobb was ineffective on the Wildcats’ first possession in overtime only taking one wildcat formation snap. After a three-and-out the ensuing field goal misses wide left. On the Vols’ ensuing possession, RB Montario Hardesty breaks off a 20-yard run for the game-winning touchdown in Lane Kiffin’s lone victory against the Wildcats.

2011: After losing 26 straight games to Tennessee the Wildcats finally notch a 10–7 victory against the Volunteers behind the play of wide receiver Matt Roark who was forced to play under center as both quarterbacks, Maxwell Smith and Morgan Newton, were out with injuries. The loss is often regarded as one the most embarrassing to Vol fans and one of the many black marks in the Derek Dooley era. Dooley himself took the blame for the loss in an interview with Clay Travis in 2016, saying the team just wasn’t ready to perform.