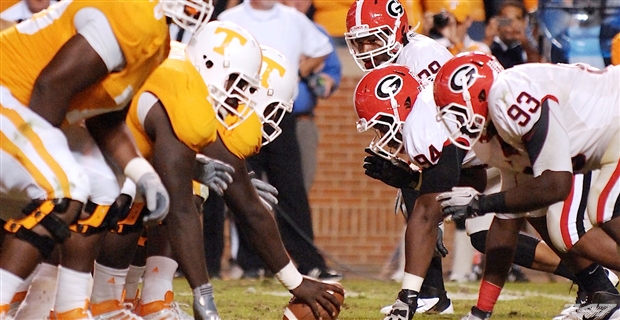 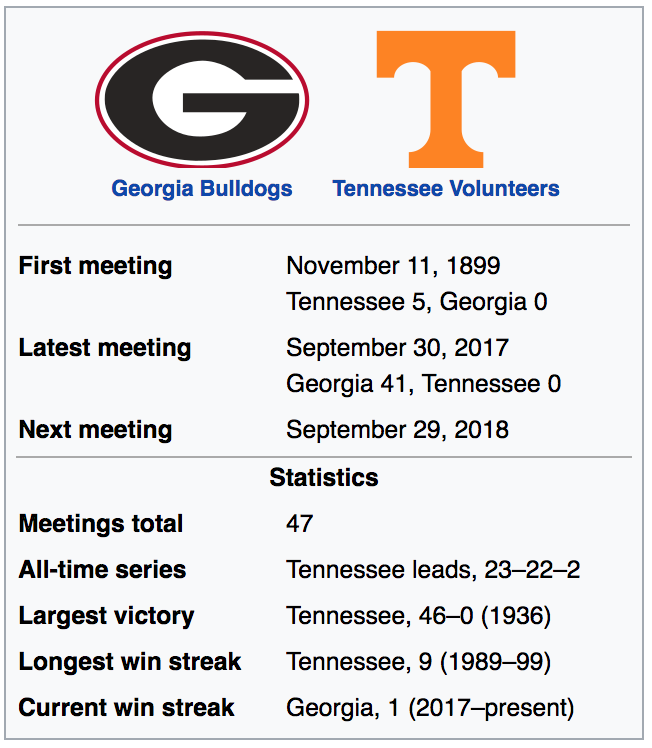 From 1899 to 1989, UT and UGA met only 21 times before the Southeastern Conference (SEC) expanded to twelve members and split into two divisions of six members each, West and East. (The conference expanded by 2 members (Texas A&M and Missouri) in 2012; therefore the SEC West and East divisions have currently seven members each.) Since 1992, the Dawgs and Vols have both been in the SEC’s Eastern Division and have met annually on the football field. The largest margin of victory overall was Tennessee by 46 points in 1936 at Sanford Stadium in Athens in their 46–0 victory. The largest margin of victory for Georgia is by 44 points in1981 at Sanford Stadium in their 44–0 victory. The longest win streak for Georgia is 5, twice, from 2010–14 and from 1909–24. The longest win streak for Tennessee is 9 from 1989–99.

1899: On November 11, 1899, was the first meeting between Georgia and Tennessee. Both teams met at Waite Field in Knoxville, TN. Tennessee defeated Georgia 5–0.

1973: In 1973, Georgia, who trailed 31–21, scored a touchdown in the final minutes as quarterback Andy Johnson ran into the end zone for an 8-yard score after the football bounced back into his hands after a botched handoff. The touchdown clinched the Georgia comeback 35–31.

1980: In 1980, Georgia, who trailed early 15–0, rallied back behind Herschel Walker, who, on his first collegiate touchdown, ran right over Tennessee defender Bill Bates. Georgia would go on to win 16–15, their first victory of an undefeated national championship season.

1995: In 1995, Georgia had the ball with under two minutes to play in a tie game, 27–27. Georgia then missed a potential game-winning field goal with just over a minute and a half left. Peyton Manning then took the Volunteers to within 40 yards, and Tennessee kicked the game-winning field goal with 10 seconds left to win their 5th game in a row against the Bulldogs, 30–27.

2000: In 2000, Georgia quarterback Quincy Carter beat the Volunteers 21–10 in Athens. The victory over Tennessee was Georgia’s first win over the Vols since 1988, after 9 straight Tennessee wins. Fans stormed the field at Sanford Stadium in celebration for the only time in school history – taking down the goalposts. Larry Munson, Georgia’s radio announcer, said “The athletic department is about to lose about $11,000…we won by 11 points and a lot of praying up here!”

2001 The Hobnail Boot Game: In the 2001 game, Tennessee was ranked No. 6 as it faced UGA coach Mark Richt for the first time. The lead was traded multiple times, but Tennessee had seemingly won the game on a 62-yard touchdown pass with only 44 seconds remaining to take a 24–20 lead. Georgia quarterback David Greene would take the Bulldogs down the field and threw a touchdown pass to Verron Haynes with 6 seconds left to upset Tennessee 26–24. Legendary Georgia radio announcer Larry Munson in a famous call exclaimed, “We just stepped on their face with a hobnail boot and broke their nose! We just crushed their face!”.

2007: In 2007, unranked Tennessee ran all over No. 12 Georgia in Knoxville early, en route to a 35–14 victory. Georgia and Tennessee would finish the season tied for the SEC Eastern Division, but Tennessee’s head-to-head victory allowed the Vols to advance to Atlanta for the SEC Championship Game which they lost. The Bulldogs would finish the season ranked No. 2, the loss preventing them from advancing to the BCS National Championship Game, while Tennessee finished No. 14.

2013: In 2013, Georgia jumped to a 17–3 half time lead. In the third quarter of the game Tennessee came back by a block punt for a touchdown, and a couple of touchdowns. With 1:13 left in the game Tennessee scored a touchdown by Rajion Neal to make the score 31–24. With 5 seconds to go Georgia answered back, with Aaron Murray’s pass complete to Rantavious Wooten. In overtime Tennessee scored a touchdown, but after review, the officials deemed it was a fumble, causing a touchback and turning the ball over to the Bulldogs. After the play Georgia took the 42 yard field goal by Marshall Morgan and was good to win the game 34–31.

2015: In 2015, the No. 19 Georgia Bulldogs made their way up to Knoxville riding a 5-year winning streak over the Volunteers but coming off a disheartening loss to Alabama at home. After the Bulldogs went up 24–3 before half, making it seemingly impossible for the Volunteers to come back, momentum would seem to switch hands quite fast. With just 3 minutes left in the half the Volunteers scored a touchdown and recovered a fumble on the ensuing kickoff, propelling Tennessee to score again before half. Tennessee took control of the game in the second half outscoring Georgia 21–7. Georgia was rallying late in the 4th quarter down 38–31 when Greyson Lambert launched a long pass right into the waiting arms of wide receiver Reggie Davis only for Davis to drop the game-tying touchdown. The unranked Tennessee Volunteers would hold on and give Coach Butch Jones one of the biggest wins of his career, beating the No. 19 Bulldogs 38–31, and snapping a five-game losing streak. The game would prove costly to Mark Richt. Even though Georgia’s only other loss after would be to eventual SEC East champion Florida, Richt would be dismissed as head coach at season’s end.

2016: DobbNail Boot: The No. 25 Georgia Bulldogs and the No. 11 Tennessee Volunteers, like last year’s matchup, saw the game end on a crazy and controversial finish, in Athens. The Bulldogs stormed to a 17–0 lead in the second quarter, but the Vols rallied to take their first lead of the game at 28–24 with under three minutes to play in the fourth quarter when Georgia quarterback Jacob Eason was sacked and fumbled. Tennessee’s Corey Vereen recovered the loose ball in the end zone for the touchdown, setting up the dramatic finish. After an Eason interception and a Vols punt, the Bulldogs found themselves at the Vols’ 47–yard line with 19 seconds to go. Out of timeouts, Eason launched a deep pass to receiver Riley Ridley. Ridley caught the pass and ran into the end zone, and Georgia regained the lead at 31–28 with 10 seconds left in regulation. At this point the CBS television broadcasters were heaping praise on Eason as going down in Bulldog lore, replaying the Larry Munson “Hobnail Boot” broadcast while the final seconds ticked off. However, in what appeared to be the turning point of the game, the Bulldogs were whistled for an unsportsmanlike conduct penalty after the score and were forced to kickoff from their own 20–yard line. After another Georgia penalty, Tennessee found themselves at the Bulldogs’ 43–yard line lining up for a desperation final play. Quarterback Joshua Dobbs heaved a long Hail Mary pass to receiver Jauan Jennings, who caught the pass in the end zone, leading the undefeated Volunteers to the 34–31 win. 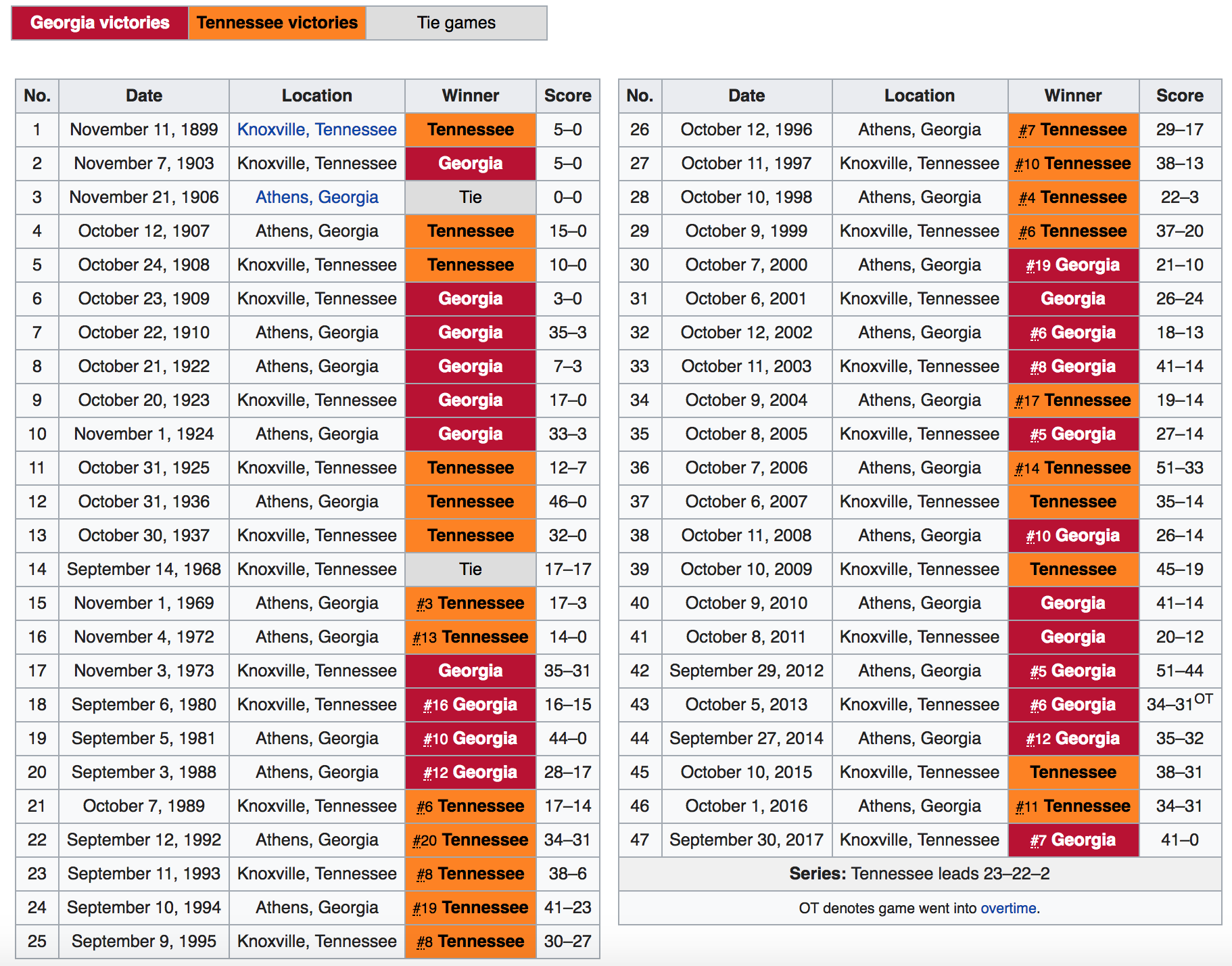