Robert Reese Neyland (pronounced KNEE-land), MBE (February 17, 1892 – March 28, 1962) was an American football player and coach and officer in the United States Army, reaching the rank of brigadier general. He served three stints as the head football coach as the University of Tennessee (1926–1934, 1936–1940, 1946–1952). He is one of two college football coaches to have won national titles in two non-consecutive tenures at the same school, along with Frank Leahy. Neyland holds the record for most wins in Tennessee Volunteers history with 173 wins in 216 games, six undefeated seasons, nine undefeated regular seasons, seven conference championships, and four national championships. At Tennessee, he reeled off undefeated streaks of 33, 28, 23, 19, and 14 games.

Neyland is often referred to as one of the best, if not the best, defensive football coaches ever. Sports Illustrated named Neyland as the defensive coordinator of its all-century college football team in its “Best of the 20th Century” edition. 112 of his victories came via shutout. In 1938 and 1939, Neyland’s Vols set NCAA records when they shut out 17 straight opponents for 71 consecutive shutout quarters. His ’39 squad is the last NCAA team in history to hold every regular season opponent scoreless.

Neyland was also an innovator. He is credited with being the first coach to utilize sideline telephones and game film to study opponents. His teams also were some of the first to wear lightweight pads and tearaway jerseys. Such measures increased his players’ elusiveness and exemplify Neyland’s “speed over strength” philosophy. Neyland is also famous for creating the seven “Game Maxims” of football that many coaches, on all levels, still use. Tennessee players recite the maxims before every game in the locker room as a team.

Neyland Stadium at the University of Tennessee is not only named for “The General”, but was designed by him. His plans formed the basis for all expansions that brought the stadium to its modern size with an over 100,000 seat capacity. Neyland was inducted into the College Football Hall of Fame as a coach in 1956. 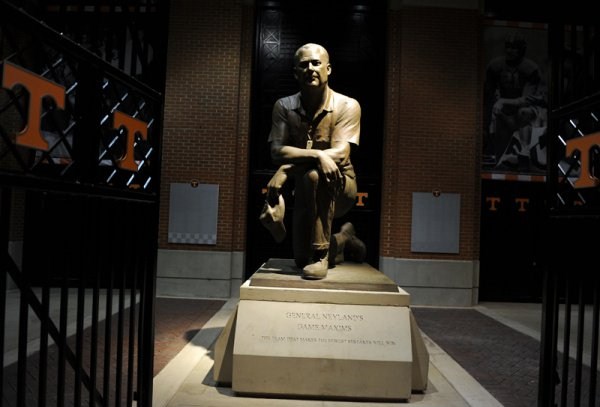 On November 12, 2010, a 9-foot, nearly 1,500-pound bronze statue of General Neyland was unveiled between gates 15A and 17 at Neyland Stadium. The statue, which was commissioned by artist Blair Buswell, is twice life-size. Since Neyland is portrayed in the kneeling position rather than standing, the statue is nine feet tall (a standing statue would have stood 12 feet tall). The statue weighs approximately 1,500 pounds, and the base is 57″ by 87″ and features the seven Game Maxims engraved into the precast.

Born in Greenville, Texas, Neyland was appointed to West Point by Congressman Sam Rayburn, graduating in 1916. One of the greatest athletes of his day, he was a star football lineman, baseball pitcher, and national collegiate boxing champion. He was commissioned as an officer in the Corps of Engineers and served in France during World War I. After the war he served as an aide to Douglas MacArthur, who was then superintendent at West Point, and became an assistant football coach for the Black Knights of the Hudson.

Wanting to continue coaching, Captain Neyland was appointed Professor of Military Science at theUniversity of Tennessee. After one season as an assistant to head coach M. B. Banks, Neyland was named head coach and athletic director by school president Nathan W. Dougherty in 1926. He coached the team for nine years before the Army called him to active duty for one year in Panama. During that first nine-year stint with the Vols, Neyland had five undefeated seasons, all within a six-year period (1927, 1928, 1929, 1931, and 1932). The Vols reeled off undefeated streaks of 33 and 28 straight games. Upon returning to Tennessee from the Panama Canal Zone, he returned to UT as head coach.

Neyland’s 1938 team went undefeated and was proclaimed national champion by several minor outlets. His 1939 squad is notable for being the last college football team to go an entire regular season unscored upon, shutting out every opponent. From November 5, 1938 to December 9, 1939; the Vols ran off 17 straight shutouts and 71 consecutive shutout quarters—records that have never been seriously threatened. Neyland completed another undefeated regular season in 1940. He was recalled to military service again in 1941. In World War II Neyland served in the China-Burma-India Theater, supervising the transportation of material through monsoons and across the Himalayas to the troops commanded by General“Vinegar” Joe Stillwell. During his military career he was awarded the Distinguished Service Medal and the Legion of Merit and made a member of the Order of the British Empire.

He retired from military service a second time, in 1946, with the rank of brigadier general, and again returned to the Volunteers as coach through 1952. After producing mediocre teams in the late forties, many thought that the General had lost his touch, as more teams moved toward the “T formation” and Neyland continued running the single wing. Neyland was vindicated, however, as he ended his career with a flourish. His 1950 team was crowned national champion by several minor outlets, while his 1951 team won the school’s first undisputed national championship. He remained as athletic director at the university until his death.

Shortly before his death, Neyland drew up plans for a major expansion and renovation to the Vols’ home stadium, Shields-Watkins Field. When he had arrived in Knoxville in 1925, Shields-Watkins Field seated only 3,200 people–barely a fraction of the capacity of Vanderbilt‘s Dudley Field. Reflecting the Vols’ rise to national prominence under his watch, the stadium’s capacity had jumped to over 46,000 seats–an over 14-fold increase–in the 38 years since then. UT renamed the stadium Neyland Stadium in his honor before the 1962 season, and the plans he drew up were so far ahead of their time that they have been used as the basis for every major expansion since then.

Neyland attended Burleson Junior College in his home town of Greenville, Texas for a year and then transferred to Texas A&M playing football a year before receiving an appointment to the United States Military Academy at West Point, New York, where he starred as a football lineman and baseball pitcher and was the academy boxing champion. The National League baseball New York Giantsoffered him a $3,500 contract, which he turned down. Instead, Neyland served briefly overseas in World War I, then returned to get his engineering degree at the Massachusetts Institute of Technology, then moving to West Point as aide-de-camp to Superintendent Douglas MacArthur.

Several months prior to his death, Neyland began working on a plan for supporters of UT athletic teams to show their interest in UT’s academic programs by offering scholarships to attract outstanding student scholars to the University. General Neyland himself was an outstanding scholar, as well as an athlete during his college days at West Point. It was the General’s dream that the University offer four-year academic merit scholarships to students who possessed outstanding academic and leadership qualities.

Following Neyland’s death, Dr. Andrew D. Holt, then UT president, announced that a nationwide campaign would be launched to raise a minimum of $100,000 to establish the Robert R. Neyland Scholarship Fund. In October 1962, at half-time of the UT vs. Alabama game, 165 women representing UT’s sororities collected more than $10,000 in a 15-minute time period at Neyland Stadium to launch the effort. By the end of fall 1962, more than $65,000 had been committed to the Neyland Scholarship fund. In the spring of 1963, a decision was made that proceeds from the annual Orange and White spring football game would go to help build the Neyland Scholarship Fund.

The first Neyland Scholarships were awarded in 1963. The first two recipients were Melissa Ann Baker of Maryville, Tennessee (now Mrs. Ann Baker Furrow, a former member of the UT Board of Trustees) and Mr. Robert English Allen of Columbia, Tennessee.

During the 1930s, Neyland began having his teams recite seven sentences that he felt summarized everything it took to win a game. These came to be known as “the Seven Maxims of Football,” or “the Seven Game Maxims.” To this day, Vol teams still recite them in the locker room before every game.