Phillip Fulmer (born September 1, 1950) is a former American football player and coach. He served as head coach of theTennessee Volunteers football team from 1992 to 2008, compiling a 152–52 record. He is best known for coaching the Volunteers in the first ever BCS National Championship Game in 1998, defeating Florida State University. Fulmer was the Volunteers’ 20th head football coach.

At the end of his tenure at Tennessee, Fulmer had the second-highest number of wins of any head coach in Tennessee history, 21 behind Robert Neyland. Fulmer also was the third coach in Tennessee history to win a claimed national championship. His 1997 and 1998 teams remain (as of 2013) as the last teams to win consecutive SEC championships. Despite a decline in the later years of his career, he was considered by many to be an icon of college football, especially one of institutional loyalty. In recognition of his accomplishments at Tennessee, Fulmer was inducted into the College Football Hall of Fame in 2012.

Fulmer currently serves as a special assistant to the athletic director at East Tennessee State University.

Fulmer was born in Winchester, Tennessee where he attended Franklin County High School. Fulmer enrolled at the University of Tennessee as a student in 1968. He promptly joined the football team as an offensive guard. While playing for the Volunteers, Fulmer garnered All-Southeastern Conference honors at offensive guard. Fulmer helped Tennessee to a 30–5 record from 1969–1971, where he played for coaches Doug Dickey (who returned to UT as athletic director and hired Fulmer as the Volunteers’ coach) and Bill Battle. The Volunteers captured the SEC championship with a 9–2 record in 1969, went 11–1 and won the Sugar Bowl in 1970, and finished as Liberty Bowl champions with a 10–2 record in 1971.

Fulmer served as linebacker coach and defensive coordinator for the Vols freshman team in 1973 before moving to Wichita State University the following season. He spent five years at Wichita State, where he coached the offensive line in 1974 and 1977–1978 and served as linebacker coach in 1975–1976. He followed those years with a one-season stint at Vanderbilt, serving as an aide to Commodores head coach George MacIntyre.

Beginning in 1980, Fulmer served 13 years as a Vols assistant coach, initially as the offensive line coach, and then as the offensive coordinator and offensive line coach. Linemen coached by Fulmer during this period include Bill Mayo, Raleigh McKenzie, Bruce Wilkerson, Harry Galbreath, Charles McRae, Antone Davis, and Tom Myslinski. Fulmer became the 20th head football coach at Tennessee midway through the 1992 season, after the decision to replace then-coach Johnny Majors.

In Fulmer’s early career Tennessee won two Southeastern Conference championships, in 1997 and 1998, and a national championship in 1998. The Vols made three other SEC Championship game appearances in 2001, 2004, and 2007 losing all three. Despite his decline over the last several years of his career, Fulmer’s winning percentage was still among the top in the country for coaches who had over ten years’ experience.

Fulmer helped return Tennessee to national prominence in 1990s, a stretch which included the undefeated 1998 season, when the Vols won the first ever BCS National Championship Game. The Vols appeared in three consecutive Bowl Alliance or BCS games from 1997 to 1999. They posted 10 or more wins from 1995 to 1998, with Peyton Manning at quarterback for from 1995 through 1997. The senior class of the 1998 team compiled a record of 45–5, losing only to Florida (three times), Nebraska and Memphis.

Fulmer had a reputation as an ace recruiter, leading many analysts to praise him as one of the game’s top head coach recruiters. Until 2008, Fulmer had only had one losing season at Tennessee: in 2005, Fulmer’s pre-season third-ranked Volunteers went 5–6, losing to in-state SEC rival Vanderbilt for the first time in his 14-year tenure. The losing season also kept Tennessee out of a bowl game for the first time since 1988, a streak of 16 years which was the third-longest in the NCAA. Fulmer never lost to the University of Kentucky, winning 17 straight games. After a slow start in 2008, Fulmer came under increased scrutiny from Tennessee fans, leaving skepticism about how long he would remain Tennessee’s head football coach despite having just received a contract extension after the 2007 season.[8][9] UT athletic director Mike Hamilton finally notified Fulmer of his dismissal on November 2, 2008. The next day, he agreed to step down as head coach following the season. That week the Vols suffered a loss at the hands of Wyoming, a 26 point underdog. Fulmer completed his long tenure at the University of Tennessee with a 28-10 win over Kentucky on November 29, 2008.

Lane Kiffin was hired by Mike Hamilton to succeed Fulmer as the head coach of the Tennessee Vols.

Fulmer was a sports analyst on CBS’s SEC Postgame Show, as well as various programming on the CBS College Sports Network.

Fulmer was a strong candidate for the University of Louisville head coaching job. He stated in many interviews that he was interested in the job and also had a phone interview with Louisville athletic director Tom Jurich. However the job was eventually offered to Charlie Strong. After UConn head coach Randy Edsall left for Maryland in January 2011, sources confirmed that Fulmer expressed interest in the coaching vacancy at Connecticut.[13] After Mike Hamilton stepped down as University of Tennessee athletic director, Fulmer has been frequently brought up by Tennessee fans as a potential replacement, but has said that he doesn’t consider himself a likely candidate.[14]

Fulmer appeared as himself in the 2009 feature film The Blind Side.

On May 15, 2012 Phillip Fulmer was inducted into the College Football Hall of Fame.

Fulmer serves as a consultant and special assistant to athletic director Richard Sander at East Tennessee State University, which relaunches a football program it had shut down for financial reasons in 2003. The recent College Football Hall of Fame inductee consulted candidates on the new coaching job, which went to Carl Torbush. The Buccaneers signed their first class in 2014, redshirting the entire roster, and will relaunch as a Southern Conference team in the Football Championship Subdivision for the 2015 season.

Fulmer and his wife Vicky have three daughters: Courtney, Brittany, and Allison. Son Phillip Jr. is from a previous marriage. Fulmers’s first grandchild (from his second child Courtney and her husband, former Tennessee linebacker Robert Peace) made his first appearance at the “Vol Walk” at Neyland Stadium on September 13, 2008. Robert Peace is the son of Joe Raymond Peace of Ruston, Louisiana, a former football coach at Louisiana Tech University, and a nephew of football great Joe Ferguson, who played for theUniversity of Arkansas and the Buffalo Bills. 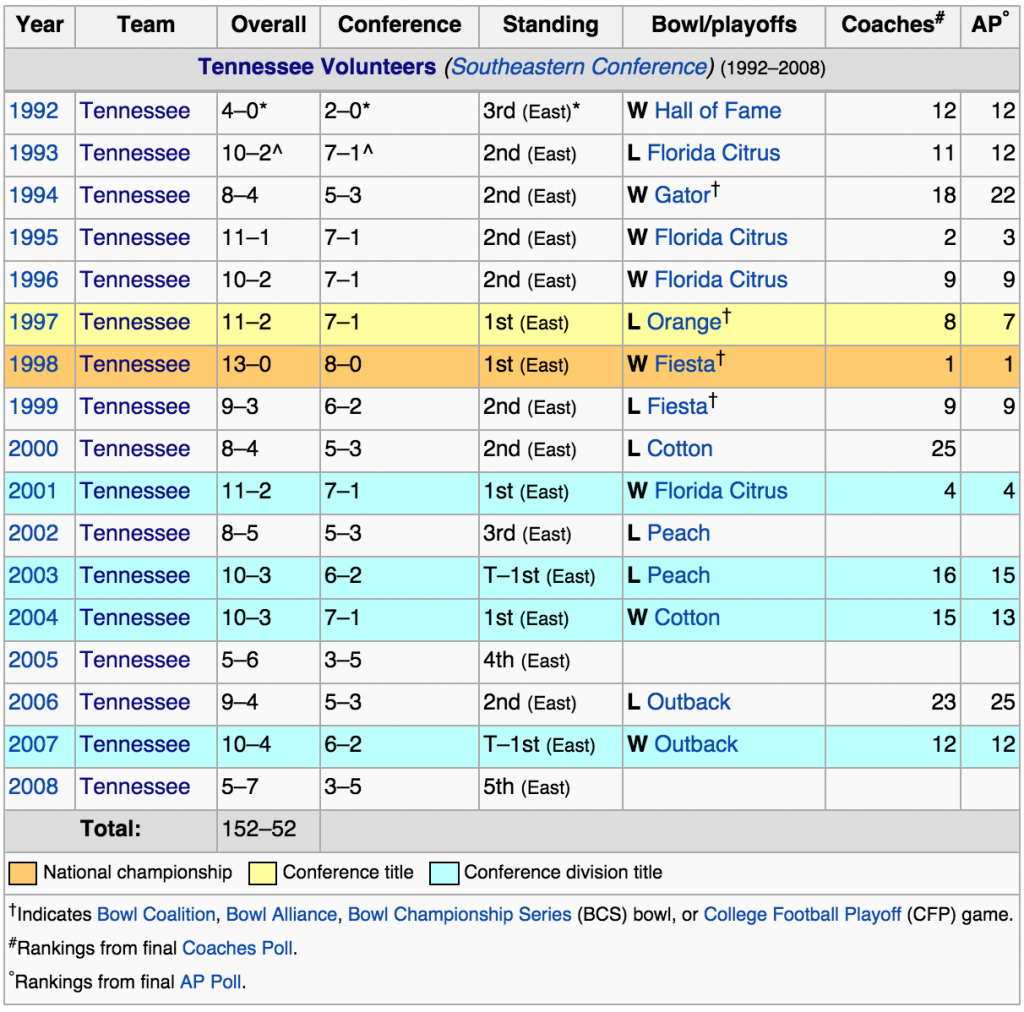