Johnny Majors (born May 21, 1935) is a former American football player and coach. A standout halfback at the University of Tennessee, he was an All-American in 1956 and a two-time winner of the Southeastern Conference Most Valuable Player award, in 1955 and 1956. He finished second to Paul Hornung in voting for the Heisman Trophy in 1956. Majors served as the head football coach at Iowa State University (1968–1972), the University of Pittsburgh (1973–1976, 1993–1996), and Tennessee (1977–1992), compiling a career college football record of 185–137–10. His 1976 Pittsburgh squadwon a national championship after capping a 12–0 season with a victory in the Sugar Bowl. Majors was inducted into the College Football Hall of Fame as a player in 1987.

Majors played high school football for the Huntland Hornets of Franklin County, Tennessee. They won the state championship in 1951. Majors’ father,Shirley Majors, was the head coach at Huntland from 1949 to 1957 and then head coach at The University of the South, Sewanee, from 1957 to 1977. Majors also played alongside his brother, Joe, at Huntland. Another brother, Bobby, also played at Tennessee and professionally for the Cleveland Browns. In all, Majors had four brothers, who all played football. Johnny was the oldest.

A triple-threat tailback at the University of Tennessee, one of the last schools to use the single-wing rather than some version of the T formation, Majors was an All-American and runner-up for the Heisman Trophy in 1956. Majors lost the Heisman Trophy to Paul Hornung, who starred for Notre Dame, which had a losing record (2–8). To date, this is the only time the Heisman Trophy has been awarded to a player on a losing team. Many fans of college football, particularly Tennessee fans, believe that Hornung won the Heisman because he played for the storied Notre Dame program, although Hornung did lead his team in passing, rushing, scoring, kickoff and punt returns, punting, and passes broken up and was second in interceptions and tackles made.

Majors is a member of the Sigma Chi fraternity. He played for the Montreal Alouettes of the Canadian Football League in 1957 and then became an assistant coach at several schools.

Majors was the 24th head football coach for the Iowa State University Cyclones located in Ames, Iowa and he held that position for five seasons, from 1968 until 1972. His career coaching record at Iowa state was 24–30–1. Majors ranks seventh at Iowa State in total wins and 16th in winning percentage.

After Iowa State, Majors found his greatest success as coach of the University of Pittsburgh Panthers in 1973. In Pittsburgh he recruited such greats asHeisman Trophy winner Tony Dorsett and Matt Cavanaugh, among others. The Panthers won the national title in 1976, after which Majors went back to his alma mater. Majors also received National Coach of the Year honors for that season.

Majors was forced to resign as Tennessee’s football coach during the closing weeks of the 1992 football season. The Vols racked up a 3–0 record under interim coach Phillip Fulmer, a longtime Majors assistant, who steered the team while Majors was recovering from heart surgery. After the Vols went 2–3 following Majors’ return, he suddenly was asked to resign during the week leading up to Tennessee’s game at Memphis State. Some believe that Majors was forced out in order to make room for Fulmer, who had become more popular with a majority of fans following his success as interim coach. A Knoxville News Sentinel story reported that Fulmer allegedly exchanged 26 telephone calls while Majors was recuperating from heart surgery with Tennessee Athletics Board member, Bill Johnson, who had played with Majors in the mid-1950s at Tennessee. A strong contingent within the Tennessee fan base believe that the Majors firing was the result of behind the scenes maneuvering on the part of Fulmer, Johnson, athletics director Doug Dickey, university president Joe Johnson. The other strong contingent believes that Majors created his own problems in the summer of 1992 by, among other things, complaining about his current contract during a preseason publicity tour across the state. Many speculate, it was likely a combination of all circumstances.

After being forced to resign at Tennessee, he returned to his second home of the University of Pittsburgh to once again coach the Panthers. Throughout the mid-1990s Majors tried to recreate the magic of 1976 at Pitt but achieved little success. He retired from coaching following the 1996 NCAA season and served at Pitt in the position of Special Assistant to the Athletic Director and Chancellor until the summer of 2007. A room on the second floor of the Pittsburgh Athletic Association adjacent to Pitt’s campus is dedicated to him and displays memorabilia from his career. Majors now resides in Knoxville, Tennessee with his wife Mary Lynn.

Knoxville named a street after Majors. The street is on the campus of the University of Tennessee and is the location of the school’s practice facility. Actor Lee Majors borrowed Majors’ last name to form his stage name. According to one published account, Lee, whose real name is Harvey Lee Yeary, met Majors in his youth while Majors was a football player at Tennessee, and they became friends. The two are not actually related, although Lee Majors was regularly seen on the sidelines during Johnny Majors’ first tenure at Pittsburgh and during the early days at Tennessee. 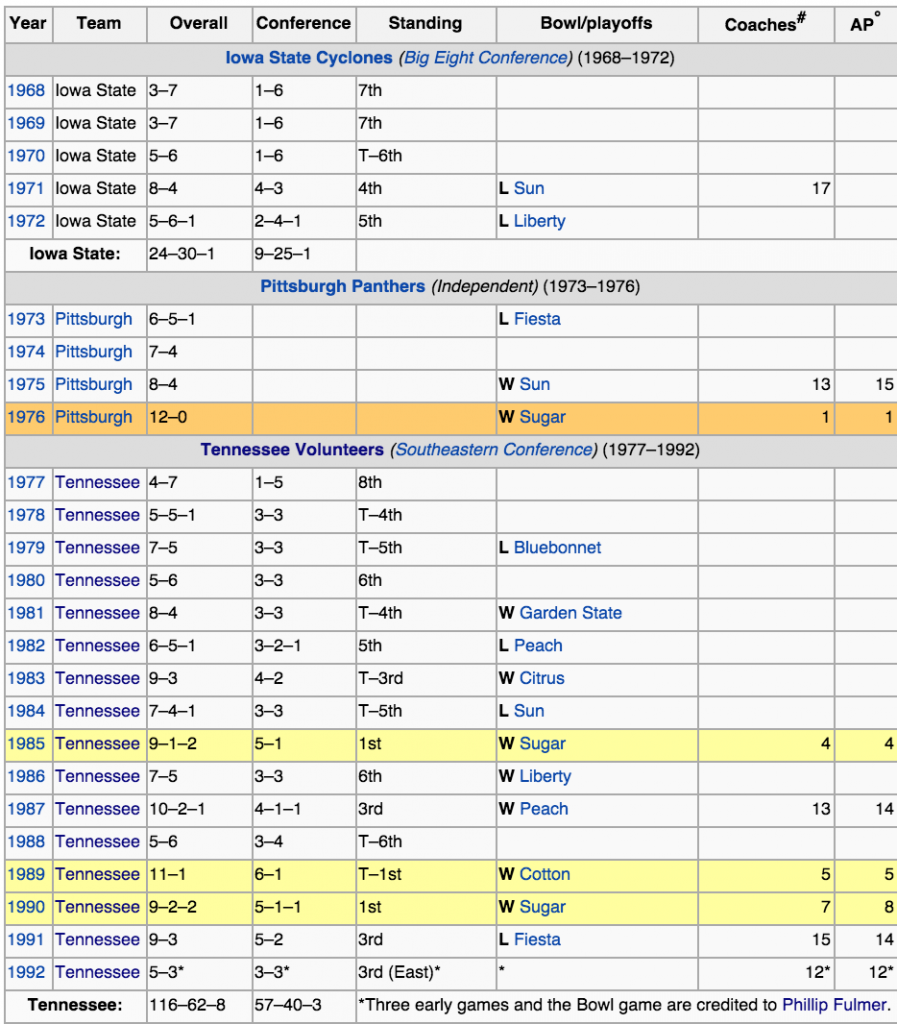