Dickey was born in Vermillion, South Dakota in 1932, and grew up in Gainesville, Florida, where his father was a speech professor at the University of Florida. After graduating from P.K. Yonge High School in Gainesville, he attended the University of Florida and played for coach Bob Woodruff‘s Florida Gators football team from 1951 to 1953. Dickey was a walk-on after being encouraged by assistant coach Dave Fuller. Dickey began his college career as a defensive back, but he remarkably advanced from seventh on the Gators’ quarterback depth chart to starter after Haywood Sullivan‘s early departure for the Boston Red Sox left the Gators without a starting quarterback in 1952. As a quarterback Dickey was not a drop-back passer, but a football-savvy game manager, who Woodruff called “one of the brainiest quarterbacks I ever saw.” In January 1953, Dickey led the Gators to a 14–13 win over theUniversity of Tulsa in the Gator Bowl, Florida’s first-ever NCAA-sanctioned bowl game.

While a student at Florida, he was a member of the Sigma Alpha Epsilon Fraternity (Florida Upsilon chapter). He graduated with a bachelor’s degree in physical education in 1954.

Dickey was hired as head coach at the University of Tennessee in 1964 by athletic director Bob Woodruff, Dickey’s head coach during his playing years at Florida. Many supporters of Tennessee Volunteers football credit Dickey with rejuvenating the program. When Dickey was hired the Volunteers had not won more than six games in a season, nor been to a bowl game, since 1957. Dickey was recognized as Southeastern Conference (SEC) Coach of the Year in 1965 and 1967, and his Tennessee teams won SEC Championships in 1967 and 1969. In his six seasons as head coach, his overall win-loss record at Tennessee was 46–15–4 (.738), and the Volunteers received five consecutive bowl invitations.

Dickey is credited with starting three Tennessee football traditions that endure today. He placed the iconic “Power T” decal on the sides of the Volunteers’helmets, had the Neyland Stadium end zones painted in an orange-and-white checkerboard pattern, and originated the Pride of the Southland marching band’s “T” formation through which Volunteer players enter the field. Dickey was also responsible for integrating the previously all-white Volunteers by recruiting running back Albert Davis, the first African-American offered a scholarship to play for the Vols, but the university did not admit Davis. Undeterred, Dickey recruited wide receiver Lester McClain, who was admitted and became the first black Volunteer football player.

In 1969, the Volunteers clinched their second SEC championship and were invited to play Florida in the Gator Bowl. Rumors swirled that Dickey was planning to return to his alma mater to replace retiring Ray Graves as head coach. Tennessee lost the game 14–13, and Dickey left for Gainesville.

Dickey became the head football coach at the University of Florida in 1970. In his nine seasons as the Florida coach, Dickey led the Gators to four bowl appearances, and an overall record of 58–43–2 (.573). Notably, Dickey gave the Gators’ former Heisman-winning quarterback Steve Spurrier his first coaching job, as the Gators quarterbacks coach, in 1978. Although Dickey became the third all-time winningest coach at Florida, he did not achieve the same level of success at Florida that he had at Tennessee, and he was replaced by Charley Pell after a 4–7 season in 1978.

Dickey returned to the University of Tennessee, where he served as athletic director from 1985 through 2002, leading one of the premier inter-collegiate athletic programs in the nation. His time as athletic director was notable for the improvement and expansion of the university’s athletic facilities.[2] Neyland Stadium was expanded to more than 100,000 seats, and other additions included the Thompson–Boling Assembly Center and Arena, the Lindsey Nelson Baseball Stadium, the Goodfriend Tennis Center, executive suites at Neyland Stadium, the Neyland–Thompson Football Complex, and the Thornton Athletics Student Life Center. Dickey also had the unusual experience of watching his son, Daryl Dickey, become the starting quarterback for the Volunteers in the middle of the 1985 season and leading them to a 35–7 win over the Miami Hurricanes in the Sugar Bowl. 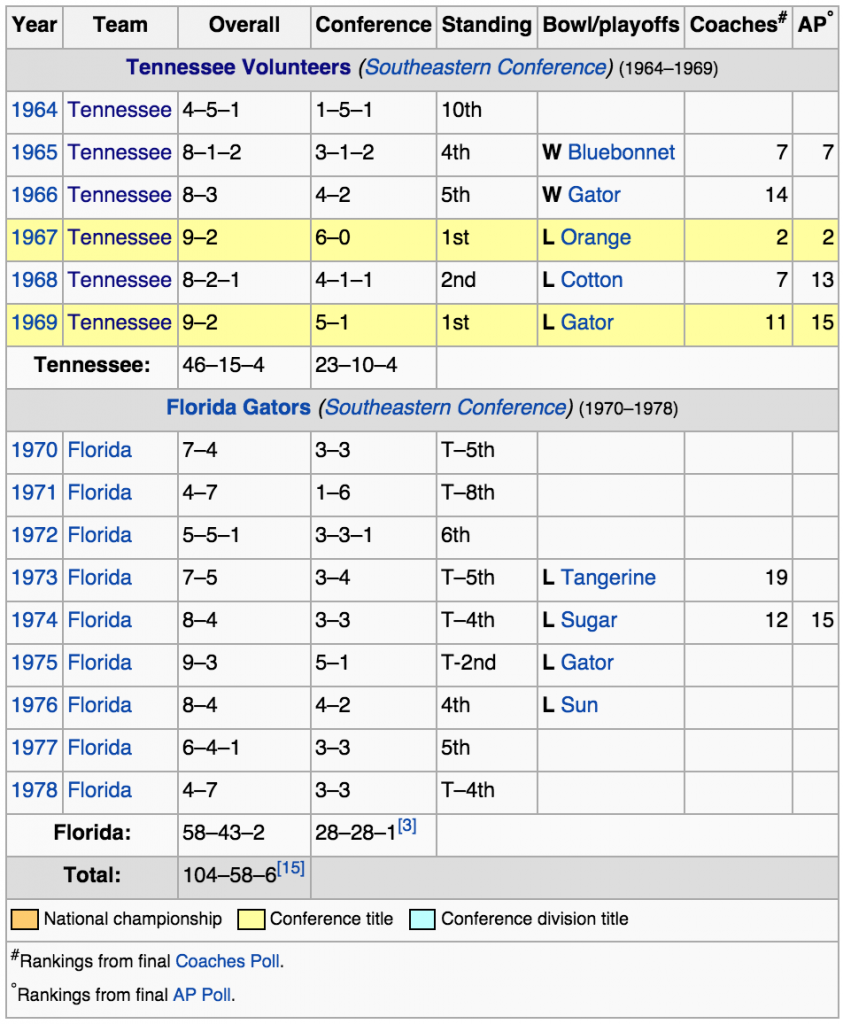