Lyle Allen “Butch” Jones, Jr. (born January 17, 1968) is the current head football coach of the University of Tennessee. He previously coached at Cincinnati from 2010 to 2012 and Central Michigan University (CMU) from 2007 to 2009. A Michigan native, he played college football at Ferris State University.

As a college senior, Jones interned for the Tampa Bay Buccaneers and then earned a job as a defensive assistant at Rutgers University right out of college in 1990. Two years later, he took a job as offensive coordinator at Wilkes University, helping to guide the team deep into the Division III playoffs. In 1995, he returned to his alma mater, Ferris State, to serve in the offensive coordinator role. His offensive acumen was clear as he led Ferris State to the top-ranked offense nationally for three straight years. He arrived at CMU in 1998, coaching tight ends for one year, running backs for two more, and finally called the plays on offense from 2002 to 2004. He left the school in 2005 to work for Rich Rodriguez and coach wide receivers at West Virginia University, helping to lead the school to back-to-back top 10 seasons.

Jones returned to Central Michigan as head coach in 2007. In his first year he posted an 8–5 overall record and a 7–1 conference record. Jones ended two streaks that had haunted his predecessors. On September 29, 2007, CMU beat Northern Illinois University, which was the first CMU victory over Northern Illinois going back to 1998. On November 6, 2007, CMU beat its chief rival, Western Michigan University, at its home field of Waldo Stadium for the first time since 1993. He guided CMU to the MACtitle at Ford Field in Detroit against Miami (Ohio), and led the team to its second consecutive Motor City Bowl. He was only the ninth football coach in Mid-American Conference history to win the championship in his first season. In 2008, a 31–24 loss to Ball State on Nov. 19 derailed the Chippewas’ MAC title hopes, but CMU earned a trip to a third consecutive Motor City Bowl. In 2009 he guided the Chippewas to their third MAC Championship in four years after an 8–0 MAC schedule, the first time in school history the Chippewas went undefeated in the MAC. CMU completed its run with a 20–10 win against Ohio in the MAC title game at Ford Field. He left CMU with a 27–13 overall record and 20–3 MAC record. He did not win a bowl game, though his team won the 2009 bowl game against Troy, 44–41.

On December 16, 2009, Jones was named head coach at the University of Cincinnati. He replaced Brian Kelly, who left to become head coach at Notre Dame. Jones had previously replaced Kelly at Central Michigan.

Jones led the Bearcats to records of 4–8 in 2010 and 10–3 in 2011, including a Big East championship, a Liberty Bowl victory (31–24 over Vanderbilt), and he was named Big East Coach of the Year. Also in 2011, Cincinnati was the only program to win both its conference championship as well as the league’s team academic award.

He led the Bearcats to a 9–3 regular season record in 2012, leading them to the Belk Bowl in Charlotte to play against Duke University. Twenty days prior to the bowl game, on December 7, 2012, Jones announced to the team that he would be resigning to accept the job as head coach at the University of Tennessee, after declining offers from Colorado, Purdue, and others. He is required to pay $1.4 million to buy out his Cincinnati contract extension, signed on January 23, 2012, that went through the 2017 season.

On December 7, 2012, Jones was introduced as the head coach of the Tennessee Volunteers, replacing coach Derek Dooley. He was the school’s 23rd head football coach.

Jones made his coaching debut on August 31, 2013 in Neyland Stadium against the FCS Austin Peay Governors, resulting in a 45–0 Tennessee victory. Tennessee earned its 800th victory in program history and became only the eighth school in the nation to reach that plateau after Michigan, Texas, Notre Dame, Nebraska, Ohio State, Oklahoma, and Alabama.

On October 19, 2013 in Neyland Stadium, Jones led the Vols to a win over No. 11 South Carolina Gamecocks.[28] This was widely considered Jones’s first signature win. Jones’s second signature win came on November 1, 2014 at Williams-Brice Stadium against the South Carolina Gamecocks. The Vols trailed 42–28 with less than five minutes remaining and came back to win 45–42 in overtime.

With the youngest roster in the FBS in 2014, Jones and the Vols finished the season with a record of 6–6 with bowl eligibility–the best regular season record and the first bowl game appearance the team had since the 2010 season, which was a 6-7 finish.

During the 2015 season, Jones’s team finally defeated No. 19 Georgia after five straight losses to the team in their annual rivalry. In most of the first half, the Vols trailed 24–3, until Tennessee came back and put up 28 unanswered points late in the second quarter and all through the third quarter. The Vols won 38–31, giving Jones his third signature win. To conclude the 2015 season, Jones’s Vols defeated the Northwestern Wildcats by a score of 45–6 on January 1, 2016 in the Outback Bowl.

In 2016, Jones led the Vols to another 9-4 campaign and second-place finish in the SEC East. The season saw Tennessee snap rival Florida‘s 11-game winning streak over the Vols with a 38–28 victory on September 24. The following week, the Vols defeated the Georgia Bulldogs in dramatic fashion via a game-ending Hail Mary pass by quarterback Joshua Dobbs. Despite these wins, the Vols struggled down the stretch with losses to South Carolina and Vanderbilt. The season finished with a 38–24 victory over Nebraska in the 2016 Music City Bowl on December 30.

In 2017, Jones’s team saw a significant turnover of starting players, and the results were not positive. After a 42–41 2OT victory over Georgia Tech in the season opener and a 42–7 win over Indiana State, the season started to shift downward. In the annual rivalry game against Florida, a last-second 26–20 loss on a game-winning Hail Mary from quarterback Feleipe Franks was a harbinger for the remaining conference games. In the next game, in a hard-fought win over Massachusetts, the Volunteers struggled until the end of the game. The next game, a 41–0 loss to #7 Georgia, was the worst shutout loss in Neyland Stadium history. The Volunteers lost the next conference game, a lethargic 15–9 performance against South Carolina, to start 0–3 in the SEC. The Vols’ next game was 45–7 loss to #1 Alabama, the 11th straight victory for the longtime rivals. The Volunteers lost 29–26 to Kentucky in the next game for only the second time in the last 33 meetings.

Jones was fired from his position as head coach on November 12, 2017. The decision came following a 50–17 loss to Missouri the day prior, which left Tennessee at a 4–6 record for the season and 0–6 in conference. The Vols’ loss to the Tigers was their worst loss to an unranked opponent in the AP Poll era. He became the second coach in the SEC to be fired mid-season during 2017, after Jim McElwain had been fired from Florida two weeks prior. His replacement was interim head coach Brady Hoke, who had worked as the assistant head coach and defensive line coach during the 2017 season. Jeremy Pruitt was his permanent replacement. 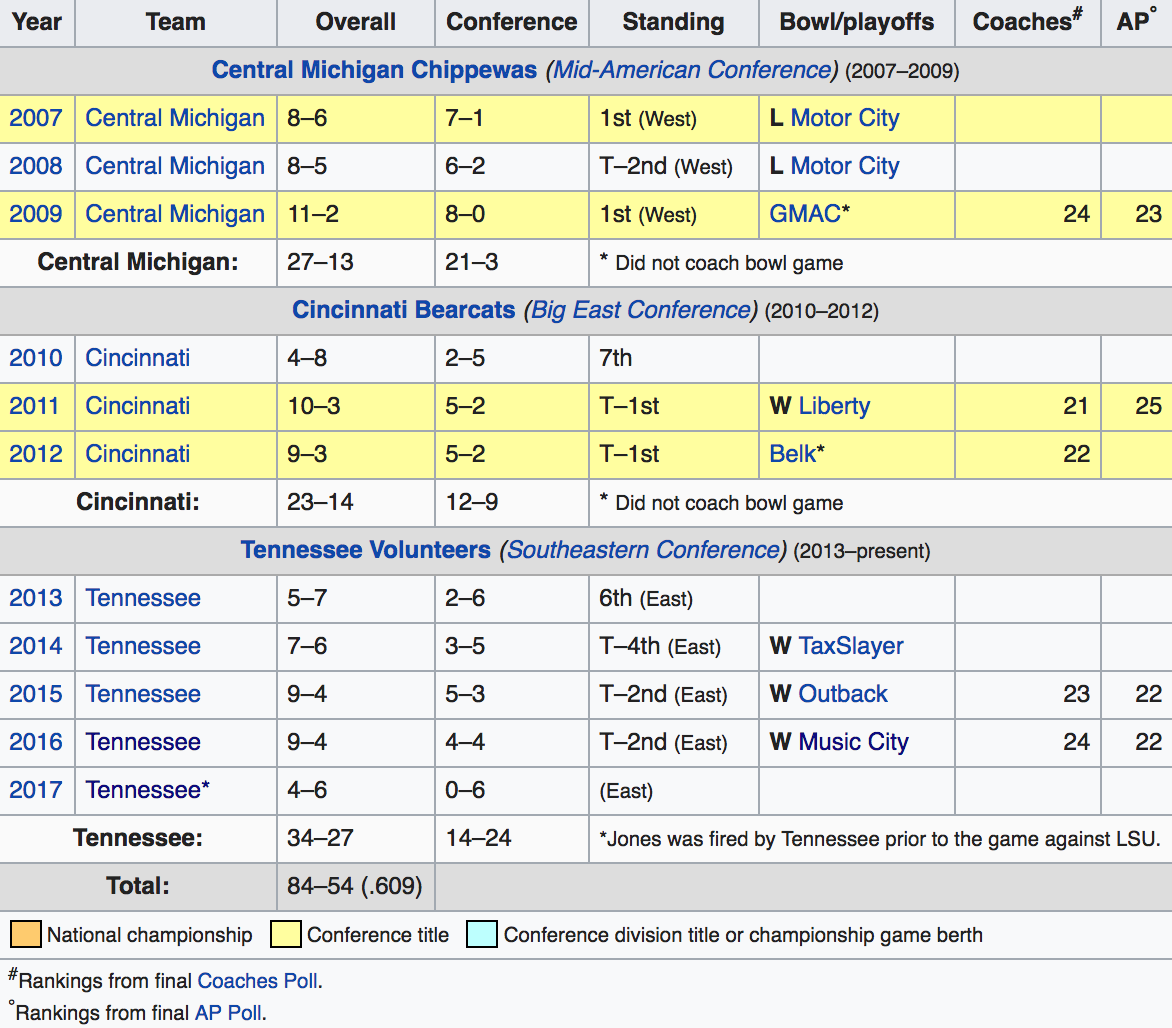 Jones and his wife, Barbara, have three sons—Alex, Adam, and Andrew.

Jones is a friend of the Miami Heat‘s head basketball coach Erik Spoelstra. On August 14, 2013, ESPN reported that Spoelstra made a special trip to Knoxville to visit and speak to the Tennessee football team.