The 1928 Tennessee Volunteers football team (variously “Tennessee”, “UT” or the “Vols”) represented the University of Tennessee in the 1928 college football season. Playing as a member of the Southern Conference (SoCon), the team was led by head coach Robert Neyland, in his third year, and played their home games at Shields-Watkins Field in Knoxville,Tennessee. The 1928 Vols won nine, lost zero and tied one game (9–0–1 overall, 6–0–1 in the SoCon). The only blemish on their schedule was a scoreless tie with Kentucky. Tennessee outscored their opponents 249 to 51 and posted five shutouts.

On November 17, Tennessee beat in-state rival Vanderbilt for the first time since 1916. Before 1928, Vanderbilt held a strong advantage over the Volunteers with a record of 18–2–3 in the first 23 meetings between the two school. Since 1928, Tennessee has dominated the rivalry. 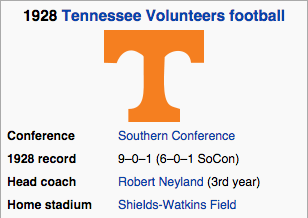 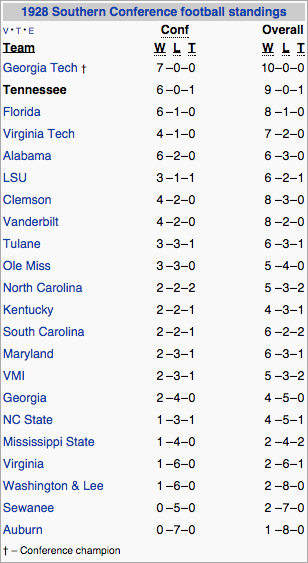