The 1916 Vols won eight games and lost none. The only blemish on Tennessee record was a scoreless draw with Kentucky in the last game of the season, preventing them from winning the Southern Intercollegiate Athletic Association championship for the second time in three years. This season also saw the first homecoming football game in Tennessee football history, against Vanderbilt. Because of World War I, Tennessee did not field another varsity squad until 1919. 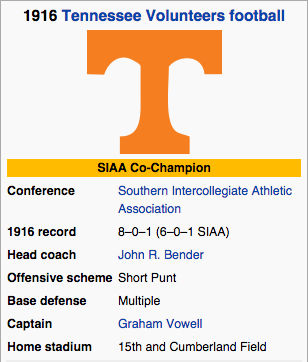