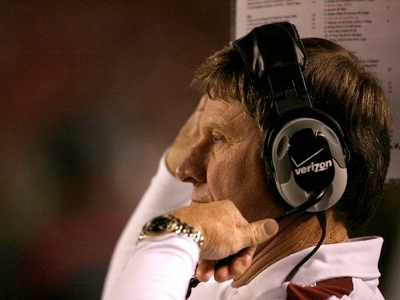 Well, the season has been a total loss by anyone’s standards but the last thing any Vol fan wants is to have a nice loss hung on us by Steve Spurrier!! He’s been the man we’ve loved to hate in the SEC and I guess turnaround is fair play.  Tennessee went down to the swamp and beat Spurrier in, what would be, his final game against Tennessee as Florida’s head football coach.  He later stepped down to pursue a crappy career in the NFL.

But he’s been back and been competitive and I guess we deserve it.  Everyone smells blood in the water in the SEC East and Tennessee is this year’s whipping pony. Spurrier was his usual smart ass self making comments about the lack of Rocky Top band in the game, etc.

Phil???  Surely we can’t have sunken this bad to where we have no gameplan against anyone?