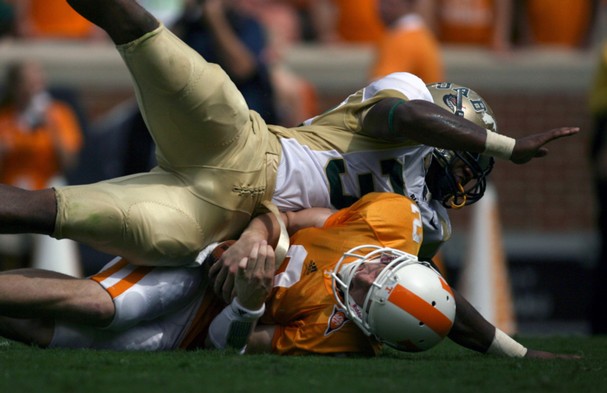 The University of Alabama Birmingham provided the Tennessee Volunteers players, coaches, and fans a lot to ponder upon looking forward.  Historically the Vols have had a reputation of playing to the level of its opponents with obvious inferior teams, coming into Knoxville and being allowed to stay into a game which usually would be a foregone conclusion.

Not only did the Tennessee Vols keep the UAB Blazers in the game, they actually showed UT fans that they are no where close to being a competitive SEC football team.  UAB looked like a quality opponent making plays, first downs, and great defensive plays.  Had the Blazers actually had a quality kicker, Tennessee would of been looking at an embarrassing scoreboard notifying everyone that the Volunteer football program was “on the ropes” and ripe for all SEC rivals to come in and dial up a win with little if no effort.

There were very few things that the Volunteer Football program could do right against the Blazers.  The offense showed complete ineptitude while the defense helped us understand the definition of dysfunctional.  First downs came as easily to the UT offense as grabbing the winning powerball ticket on a Tuesday!

Now October comes as all Vol fans clinch their teeth and try and keep at least one eye open!