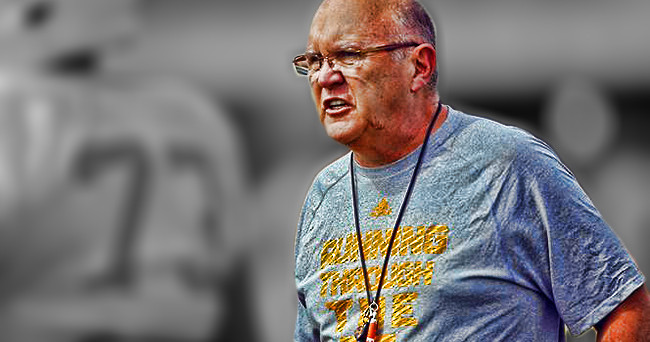 This weekend left me scratching my head. Is Mike DeBord the right fit for this Tennessee offense or is this offense limited by DeBord’s play calling?

Mike DeBord  has had a long career as offensive line coach and Coordinator, which includes two stints at Michigan, one where they won the national championship and when they got beat by Appalachian State.  At least on his Michigan teams the offense never seem to really be too potent. They scored an average of 21 to 24 points per game but were led to victory mainly do the defensive stands keeping the opponents to fewer than 17 points on average. In the 1997 Michigan National Championship teams, the majority of the games had slow starts offensively by Michigan but were able to score points given the talent level. The 1998 and 1999 teams had a different personality, being able to score often and quickly. His return to the program in 2006 & 2007 saw a much different team, one that struggled offensively to gain significant yardage and scores.

So does Tennessee just not have the caliber of talent we really need for a prolific offense? Or has the past decade passed DeBord by in his ability to run an offense? 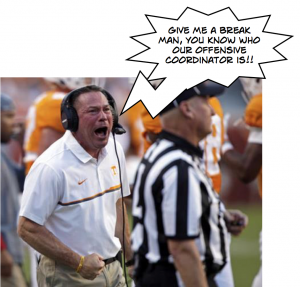 My personal opinion is that, despite Butch Jones’ loyalty to DeBord, the game has passed him by. You can not convince me that the talent on the field with this Tennessee team is simply incapable of putting together good drives, good yardage, and scores on our opponents. Games that should of been easy wins by Tennessee turned into struggles and overtime victories plagued by an offensive scheme that would work best for rec-league football teams, certainly not in the SEC. Tennessee is loaded with talent that can effectively make our offense far more potent give the right strategy. Problems with our offensive line complicates things but a good offensive coordinator should be able to develop successful plans to overcome issues on the line. DeBord simply hasn’t been able to do that. With games coming down to the line all season and clear adjustments by Butch Jones where Vol fans were given a taste of a real Tennessee offense, Mike DeBord is no longer the man for the job in Tennessee.

We had way more production offensively in the past two years, even in losses, than this year combined. Although we are 5-2 and if able to fight through injuries could finish the season 10-2 and a possible SEC East leader, we will likely still have painful games the entire season. Simply because DeBord should not be our Offensive Coordinator.

Get rid of him!