Is this the season?

I know what your thinking…. “How many years have we been saying this?” For at least 16 years this question has been looming in the minds of fans. Rational ones will tell you that any teams chances of repeating a National Championship are slim. Which is why I say 16 years instead of 18. Nick Saban has proven that theory wrong by propelling the Tide to 5 National Championships in 6 years has shown that it is possible if you are the right coach with the right team. 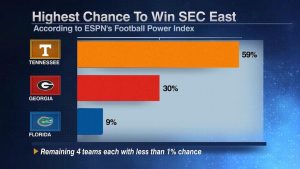 Is Butch Jones the right coach? Coming into his 4th year at Tennessee and following a successful 9-4 season with a combined loss of 25 points in all 4 games, Jones and Tennessee are being hyped even stronger than last year being ranked 10th in the ESPN Preseason Poll but a puzzling 22 in the AP College Football Rankings and again being talked about as winning the SEC East. Of course winning the SEC East would include a much needed win over Georgia and Florida which touts a 11 year domination over the Vols.

Improving on a 9-4 season is going to be tough considering Tennessee’s 2016 schedule which now includes a new venue at Bristol Motor Speedway against Virginia Tech and new head coach Justin Fuente and also consists of the normal SEC block in October that puts the Vols against Florida, Georgia, Texas A&M, Alabama, and South Carolina. So here are some possible best case scenarios for the 2016 season. Assuming highly that Tennessee can put their money where their mouth is on hype! 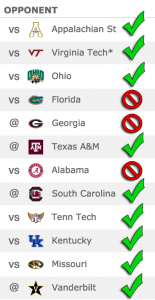 Although no fan base has patience, baby steps can make all the difference in the world in working your way back into the top. With Tennessee’s 2016 schedule, Tennessee has a very good chance at improving their record by one with wins over everyone except the big 3 of Florida, Georgia, and Alabama. This would be the first baby step that would send Tennessee to 9-3 facing another and possibly better more competitive bowl game.

Even though Tennessee had narrowly beaten Georgia last year, this year’s game is in Athens making a possible trap in the SEC East rankings with Georgia also now with new head coach Kirby Smart. Problems with this scenario could be Virginia Tech and Texas A&M. Both teams Tennessee has had little experience with playing, Tennessee leading Virginia Tech 5-3 and also leading Texas A&M 2-0 having only played them twice. 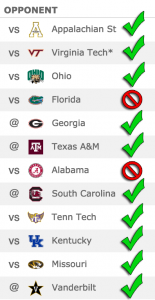 Tennessee and Georgia have had a perfectly even record sitting at 22-21-2 in Tennessee’s favor dating back to 1899. Tennessee has won 9 out of 22 games in Athens, however, making this years game an almost must win to improve Tennessee’s schedule from 2015 and give Tennessee a step closer to the SEC East.

With the game being in Athens and Kirby Smart being at the helm, it would be very naive to assume this will be the usual Georgia Bulldogs under Mark Richt. This team will be better, more prepared, and playing at home.

With this game following Florida, Tennessee better be well prepared for this potential roadblock. Smart is likely to quickly make the Bulldogs a force to be reckoned with in the SEC. Tennessee unfortunately loses its 12th loss to Florida, it could spell disaster for the Vols. 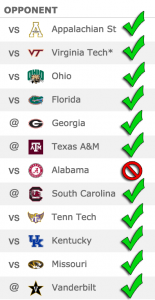 Obviously, short of an undefeated season and National Championship, this would be Tennessee’s best case scenario and statement maker for Butch Jones’ 4th season.

Nick Saban is clearly the best coach in college football and knows how to get the most out of his teams. With Alabama once again coming to Neyland and the Vols past 2 losses to them were a combined 9 points, it is not unconceivable that the Vols can not only erase the 11 year drought on Florida but possibly also end the 10 year drought against the Crimson Tide.

Nothing would make Vol fans happier than seeing the big 3 go down all in the same season but are we there yet? As much as I would like to see this, I think we are still a year or two out from Jones bringing the Vols back to glory in the SEC.

We have also been shown that seasons are unpredictable and Jones will have to keep Team #120 on top of its game and focused throughout the season so a team we are favored against doesn’t shock the system and keeps the faith in Butch Jones’ plan. Recruiting now plays a much bigger factor as we will start to see what the past top 5 recruiting classes start to show us along with the Vols current field of talent. One thing for sure is the offense needs to be far more potent and less predictable if the Vols are going to get through this season while improving as a program.

« The Face of a Legend… #checkerneyland »