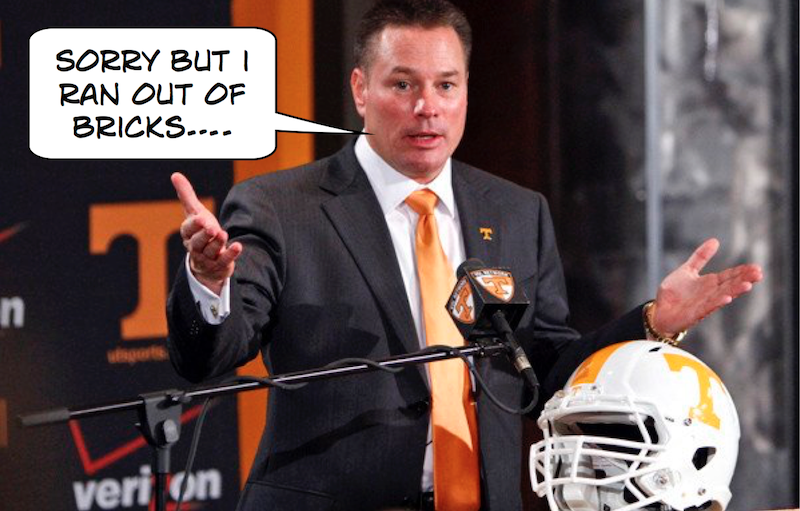 The Butch Jones era was on life support as of Saturday morning. Yes, there was a theoretical, one-in-a-million chance that he could suddenly lead his Tennessee Volunteers on some miraculous tear through the remainder of the season, en route to the SEC Championship game in Atlanta. But even entering a low-risk game against the Minutemen of the University of Massachusetts — a game in which the underperforming Volunteers were still favored to win by 28 points — the chances of such a run taking place were really, really far fetched (and that’s being very optimistic).

Fast forward to Sunday morning, and all those hopes for such a miraculous run should be long gone. If Jones’ job was on life supported when the weekend started, then by the time the weekend was over, it became clear that it’s time to pull the plug.

Nobody believed UMass was going to come into Knoxville and simply roll and play dead the first time they heard Rocky Top being played but this is a team that lost by double-digits to Coastal Carolina and Old Dominion; let’s just say that nobody is going to confuse those schools for Alabama and Clemson anytime soon. They were ranked near the very bottom of the country in scoring offense (110th in the country heading into the game) and rushing yards per game (118th entering the game). Or, to put it most simply: this is a team that won exactly ONE game in the 365 days prior to their game against the Volunteers.

And yet, for most of the game on Saturday afternoon, the Volunteers looked unprepared, uninspired, and uninterested. The oddsmakers said that Tennessee should win by four points, and yet the Volunteers played down to the caliber of their opponent, and made their 17-13 win a four-point nail biter.

The fact that star running back John Kelly had the audacity to come out and say “We got the dub, so I’m not even tripping,” shows you how unashamed Jones’ men really were about their performance. To them, mediocrity and “doing just enough to get by” is the standard. So Jones can come out and say that the team’s performance was “unacceptable,” as he did in his post-game press conference, but the thing that was totally unacceptable — and has been for way too long now — is Jones’ job performance.

Since Jones arrived in town, the Volunteers have a 14-19 record in SEC games, and they’re 2-5 in their last seven conference games. When the going gets tough, who the hell knows where Jones is going; he has a 9-12 record in games decided by one score or less, having lost three of the last five of those types of games. Week after week, he has made colossal coaching blunders that get more and more “unacceptable” — to use Jones’ own words — culminating in the loss to the Gators. After the loss against Florida, it got to the point where Jones’ coaching gaffes became a punchline for national college football analysts; heck, even NFL analysts made him the butt of a few jokes they made on television.

Tennessee dives into the heart of its slate of SEC games for the year this Saturday, and if Jones keeps leading the team to total no-shows, things could get very ugly in a hurry. Georgia comes to Knoxville this week, with a #7 ranking nationally after beating the ever-loving mercy out of Mississippi State (who themselves were one week removed from pounding LSU in Starkville). The Bulldogs are favored by a little more than a touchdown (7.5), and it wouldn’t be any surprise to see a lot of fans take Georgia and the points, considering they only allow 11.5 points per game, and are playing against a team that squeaked out 17 miserable points against UMass.

Assuming Jones doesn’t somehow manage to screw up the bye week (we wouldn’t put it past him to do so), life for Tennessee fans could get even worse before it gets better. The Volunteers get South Carolina coming out of the bye who dismissed Tennessee’s chances of a SEC East title. Every game in the Jones regime against South Carolina has been decided by three points or less, so Tennessee fans should be ready for even more heart palpitations in that game.

After that? It’s just Alabama. You know, the #1 team in the nation, who’s averaged over 36 points per game when they’ve played Jones’ Volunteers. Hey, maybe the fifth time’s the charm, right?

Tennessee finishes out October playing against the University of Kentucky in Lexington. Normally, you’d look at that game thinking “well, at least we’ll win a game there,” but can you really say that at this point?

Jones has lost four games in each of his past two seasons at Tennessee. But there’s a realistic chance he could have four losses this season before the start of November.

We know the #1 reason that Jones still has a job right now is because first-year athletic director John Currie doesn’t want to be saddled with the cost of paying out Jones and the rest of his coaching staff, and figuring out whether he has enough money left in the coffers to go attract any of the “big name” coaches atop the wish list for Tennessee fans.

Even though it seems unlikely, perhaps the current athletic department of Tennessee could convince Jones to take some type of buyout, like the school arranged with Derek Dooley. Although, why would Jones take such a deal, considering he knows he has all the leverage, with the school not itching to fire him as rapidly as the fans are?

Either way, the Tennessee athletic program has to figure out something, because the cost of keeping Jones around, and the damage that his substandard job performance is having on this proud football school, may end up costing Tennessee much more in the long run.