What was suppose to be a good romp of an easy front schedule before SEC opponents come calling, The Vol fans were excited about seeing our team start to prove its worth. Being predicted to win the SEC East and to win all the home games at Neyland, the Vols were quickly woken up as they were clearly ill prepared for the Appalachian State Mountaineers. As a 3 touchdown favorite against App State, clearly everyone had under estimated the Mountaineers who finish 11-2 last year in the sunbelt conference as well as bought into the hype that this could be a statement year for the Vols. 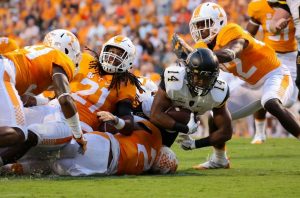 What happened Thursday night sent Vol fans leaving the stadium in the latter part of the 2nd quarter. The Vols had one of the most sloppy games we’ve seen since the days of Derek Dooley. Bad blocking, fumbling, poor quarterback decisions, and a horrible offensive game plan gave App State the chance to upset another top #10 team since Michigan 9 years ago. Appalachian State clearly was ready for this game.

Had it not been for the Appalachian State kicker, the Vols would be sitting at 0-1 right now and certainly sending the Volunteer fanbase ready to get out their pitchforks and fire. Appalachian State were clearly underestimated by the Vols. Both teams had an almost even statistical game both offensively and defensively.

What was over estimated?

Our offensive game plan was over estimated for one. Having the hype the Vols were getting and the expectation that maturity of the team would lead to a much more productive offense was way off. We saw the same plays we’ve been seeing for the past 3 years. Vanilla run right, run left, short pass, a few quarterback runs, and 1 or 2 deep attempts each quarter.

For that reason, I feel that Mike Debord needs to be replaced as Offensive Coordinator. He clearly does not understand the college football offenses any more, the game has passed him by and we need someone who knows how to get the most out of the talent we have on the field. Just a footnote to Debord.. He happen to be offensive coordinator at Michigan when Appalachian State beat the Wolverines.

Josh Dobbs was also over estimated with Vol fans thinking he had spent most of the off season working on his quarterback skills and perhaps being more of a pocket passer than a running QB. Even though Dobbs has little time to make offensive decisions due to the unbelievable ineptitude of the Vols offensive line, he still couldn’t do what we wanted to see. It was clear that Dobbs is only capable of making 2 reads before improvising the play. Tight End Ethan Wolf was open so many times during the game with a good 5-8 yard cushion from defenders that Dobbs could of easily made more conversions but just couldn’t see it.

Granted most of this could be due, again, to the offensive line but even Dobbs was sloppy when he did get the chance to make a play and fumbling the ball in the endzone makes me scratch my head. Dobbs is a veteran player now and has the talent and intelligence to be a difference maker in the Vols offense.

Going into Bristol and against a Virginia Tech defense, the Vols offense had better do a LOT of work before then learning how to block, get open, read the defense, and go through the progressions. The run right, run left, maybe short pass, and other plays won’t work against Tech and Tennessee could be facing its first loss of the season.

« Getting Cheeky With It! Buttered Turkey »