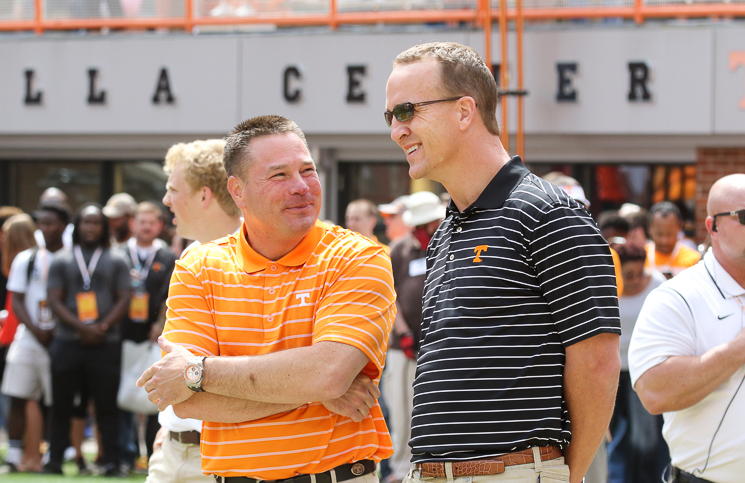 Yesterday on the Dan Patrick show, Peyton Manning sent the VOL rumor mill into a tailspin talking about a possible return to Big Orange Country as a future coach. Although it wasn’t until the year after his departure that the Tennessee Volunteers took the first BCS National Championship in 1998 and Peyton was never successful in beating the Florida Gators, he’s still reveared as one of the most intelligent and prolific quarterbacks of the modern football era.

Starting his career at Tennessee in 1994, Peyton lead the Vols to a 8-4 season capping off a 45-23 stomping of the Virginia Tech Hokies in the Gator Bowl, an impressive 11-1 season ending with a Citrus Bowl victory over the Ohio State Buckeyes, a 10-2 season and another Citrus Bowl appearance shooting down Northwestern, and a 11-2 senior season in 1997. Peyton’s success in the National Football League, along with his continued support and precence to the Tennessee program, has propelled him into many debates regarding his quarterbacking ability and knowledge of the game.

Would Peyton be wise to return to Tennessee?

Quickly dispelling any thoughts of being a head coach or undermining the momentum Butch Jones has created in his upcoming 3rd year at Tennessee, Peyton did comment that being a quarterbacks coach or even potential offensive coordinator would be something he would consider.

Personally I’ve always cringed seeing a star return to his alma mater thinking he can duplicate his success where it began but in a different job. Would this tarnish the legacy he has worked so hard to cultivate over the decades? Yes, Phillip Fulmer did it and did it with success but we live in a much different world now than we did then, could it happen again with Peyton? Or could it prove to be a mistake?

With that being said, Peyton Manning returning to Tennessee as a QB coach or OC would be a fit made in heaven. Assuming of course Peyton can learn to listen to the head coach. Both the Colts and the Broncos will tell you that Peyton consumes the entire team and the head coach turns into a simply figure head while Peyton runs the team.

Bonus points would go to recruiting, where you presumably have an up and coming Tennessee team, with 2 top 5 recruiting seasons already, imagine how good recruiting would get with Peyton Manning orchestrating the offense. 5* recruits would be lining up to be a part of big orange nation! So I say, Peyton, good luck this season. I hope you get another super bowl ring but regardless I would look forward to seeing you on the recruiting trail and on the sidelines as more than a spectator.