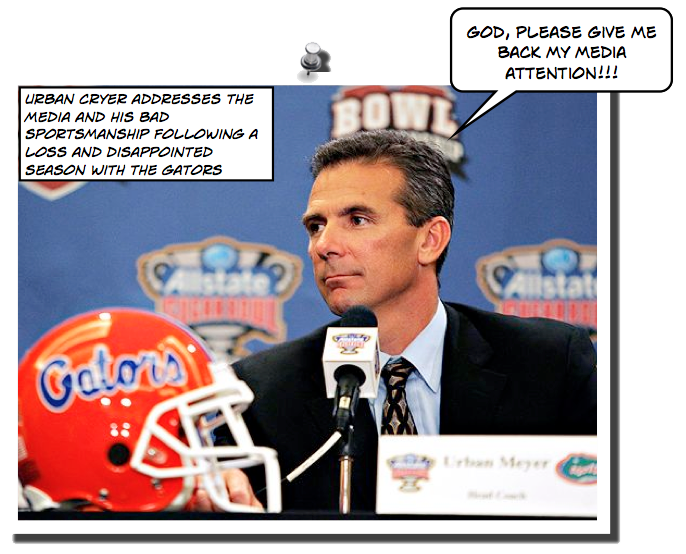 In an undisclosed location in a galaxy far far away….. Florida Gators head coach suddenly announced, prior to the teams game in the Allstate Sugar Bowl with Cincinnati, that he was stepping down as the head coach due to “health related issues”.  The announcement obviously sparked a flurry of media coverage and speculation regarding Urban and the disappointment felt that Florida wasn’t playing for the National Championship.  Later reports showed that Meyer’s health related issues were not life threatening and he still intended on coaching in the Sugar Bowl.  After 28 hours of media headlines, it was reported that Meyer had changed his mind and was instead taking an “indefinite leave of absence” and assuming an non-coaching role at Florida.

While I will agree to those who say that his health should be taken seriously and, whatever the issues, are non of our business, I still can’t help but to wonder why now?

1..Why announce this before the Sugar Bowl?

2..Why still coach the Sugar Bowl?

3..What is a leave of absence going to accomplish?

Urban has shown over this year that he is a very poor sport and, more than anyone, can’t handle less than perfect performances and wins.  He is now faced with 2 SEC coaches, one who has beat him and the other who simply annoys the hell out of him (and probably will beat him eventually) as well as the loss of his main star Tim Tebow.

While most of us that watch college football knew that Meyer’s time at Florida was numbered anyways, did not quite see this coming.  Urban Meyer has basically cherry picked his way to the top, very successfully I might add!

Now he is simply faced with the prospects of having to really coach and build a team, recruit, and find new stars and I question that he has the moxy to do that.  Clearly he has shown that he doesn’t with this announcement and its timing.

If you’re going to announce that your quitting, at least finish the season!!  If you are going to blame it on “health related issues” that are so serious it has forced this decision, then you shouldn’t be coaching the Sugar Bowl!!!

Clearly Meyer wants out of Florida, he’s done his duty and gotten them 2 National Titles in 5 short years and will walk out a legend more so than Spurrier.  He doesn’t want to hang around and continue with the program while he competes with the media spotlight and new SEC challenges among Saban and Kiffin.  It has been widely speculated that Jacksonville Jaguars owner has stated he wanted both Tebow and Meyer and this just simply makes Meyer look even worse.

You didn’t stay at Notre Dame, you didn’t stay at Bowling Green, nor Utah, so what makes anyone think you’ll stay at Florida?  Nothing!!!  Meyer is good as gone, the recent revelation about a “leave of absence” is simply to cut off the bleeding before it turns into a full blown hemorrhage!!  Florida is simply keeping the illusion that he is still on board with the program only to keep the recruits from jumping ship and possibly winding up in Knoxville.

Meyer is gone!! It was only a matter of time, embrace the inevitable!  While I would love to see him stick around long enough to lose to Kiffin, I certainly will welcome an SEC that will be easier to climb in his absence!!!

Another year of non-stop talk… 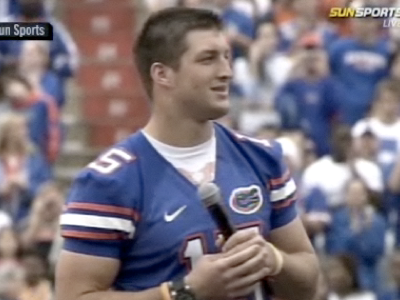 While I am completely sick of all the Tim Tebow talk and “superman” comparisons, I am even more sick that I have to listen to it for another 17 months or so…

While I will give credit where credit is due, he has lived up to the hype on almost all levels.  Please I implore the media to pick someone else next year!  Focus on all those “other” great quarterbacks in college football who are also sick of the Tim Tebow talk.  Florida will inevitably be at the top of the polls next year and Tebow talked about again for the Heisman.  Not because it is earned, but because the media drives the desire and need for it.  Without the bias media always talking about things before the game is even played.  The rest of the world has to just sit and wait for him to graduate or for ESPN to shut the fuck up!!!!

Congratulations on a great year Tim!! No offense, I hope it was your last!