Peach of a Loss 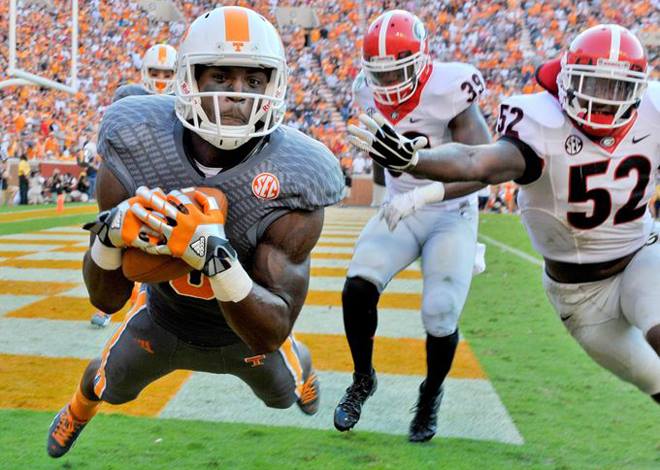 Knoxville, TN – October 5, 2013: In a game most Vol fans viewed as the beginning of the Vols freefall through the SEC, surprisingly Georgia was faced with a battle that pushed them to an overtime win.  The Volunteer’s Head Coach Butch Jones made the decision to sport the “Smokey Grey” uniforms for this game.  Personally I would of preferred to break out the unis for a game the Vols had a chance to win but I was pleasantly proven wrong as the Vols gave Georgia all it could handle for the entire game.  Georgia, in recent years, have fallen victim to “overhype” during the year and being unable to follow through during the season losing to teams they should of beat.

Tennessee who is sporting arguably the toughest SEC schedule playing 6 ranked teams, began the toughest stretch with Georgia and Vol fans hoping we could just look respectable. Then came a 17-17 tie and Vol fans starting to look throughout Neyland in disbelief.  Disbelief due to years of disastrous games under The Weasel and The Dooley!  Suddenly Neyland erupted as hopes of Vol glory returned to the crowd. With confidence waning in Worley, then comes 24-24 tie, and 31-31 tie, including a blocked field goal for a touchdown and a miraculous catch by emerging superstar Marques North in the endzone which defied even Physics professor’s theories on the Hill of the University of Tennessee Campus.

Unfortunately the Vols, in overtime, came away with a loss and, while there are no moral victories in College Football, fans poured out of Neyland optomistic that Coach Butch Jones has added another brick to his program by showing the SEC that Tennessee is once again hanging with other ranked teams.