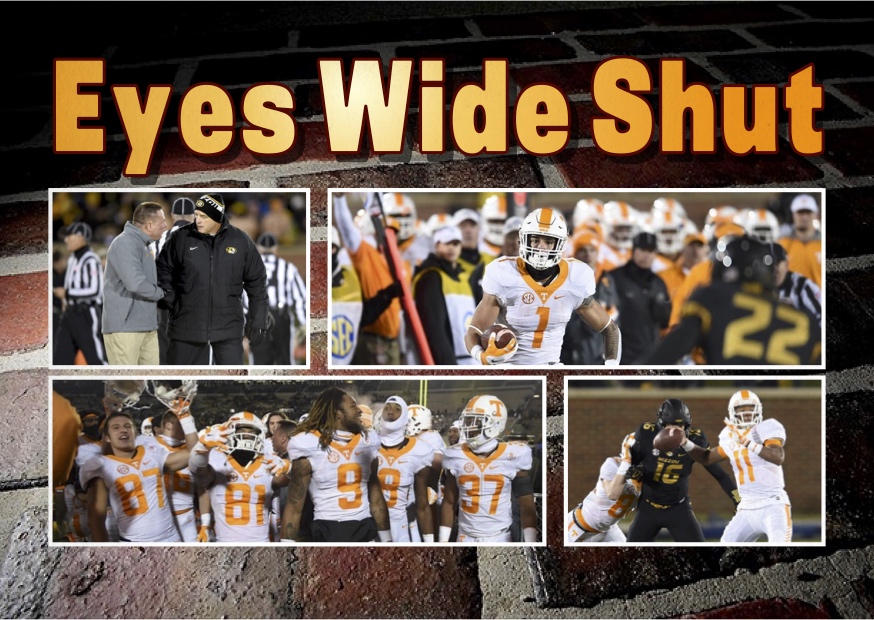 To say I was cautious to watch this game is an understatement. Given the Volunteers’ record in the second half among big games gave me plenty of worry when factoring in Missouri’s very good defense. Also following a very lackluster performance against North Texas who was just rolled by Middle Tennessee State 41-7 which should have been more in line with Tennessee’s score being a 42 point favorite with North Texas and finishing only 24-0 gave more concern to fans about the Vols going 8-4 for the season.

Tennessee, without Josh Dobbs, have had a very average running game by Hurd and Kamara despite their ability to gash opponents given the right play calling and good up front blocking that hasn’t been there all season. Flashes of this ability have come through the Vols offense like a shooting star, if you aren’t there to witness it, you might not see it again! Josh Dobbs has begun to regress as a good passer at QB even now when staying in the pocket. 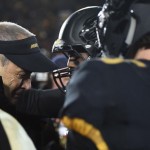 Only adding to the stress was the recent announcement that Gary Pinkel was resigning as Missouri’s head football coach due to a battle with lymphoma. An announcement that galvanized the Tigers against last week’s opponent BYU who came in as a 2 loss team. This determination could very well of been valuable against the Vols and keeping them from going 7-4 on the season. Missouri’s offense has been their achilles heal this year but their defense has been playing well which could of spelled trouble against the Vol’s wavering offense.

Other factors in this game was the weather and location. Tennessee traveling to Columbia to play the Tigers in the coldest game thus far for the year had fans concerned about the offense becoming even less of a factor in this game. Volunteer fans desperate to see a team that starts to dominate games, not just in the schedule, but especially in the SEC. This game has the perfect trappings to hand the Vols another loss and possibly another hot seat situation for the Vols head coach Butch Jones who said earlier in the week “it takes at least 6 to 7 years for a coach to build the right program”. 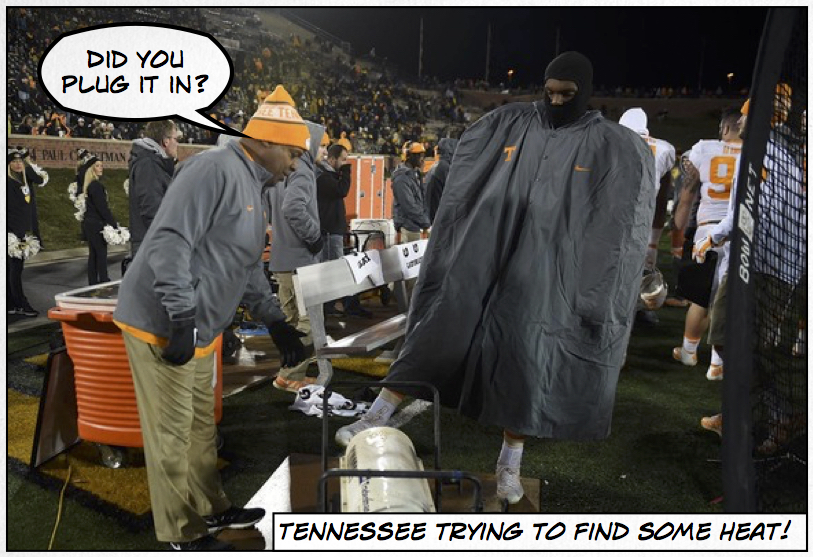 What was hot though was Tennessee’s defense which dominated the field and kept Missouri’s offense from any productive drives as well as keeping them off the scoreboard all the way into the 4th quarter. The Tennessee had productive drives which stalled once in the redzone leaving the Vols settling for 3 Aaron Medley field goals in the first half giving the Vols a 9-0 lead. Not enough to put Vol fans at ease going back to our inability to hang on to leads and finish games this season. Then came what we all expected and suddenly in the 4th quarter Missouri began to catch fire scoring a touchdown and successful 2 point conversion putting the score to 19-8 and having Vol fans say “here we go again”.

Luckily the clock and defense were on our side and Tennessee sent Gary Pinkel and the Missouri Tigers reeling as their last home game for the season ended in a loss 19-8 and putting Tennessee one Vanderbilt game away from a 8-4 season despite how painful it was to get there.

What concerned me most in this game was our receiving core that consisted of just Von Pearson throughout most of the game. At one point I even asked the TV (Yes, I’m a crazy Vol fan) don’t we have other receivers on the field? 3 receivers caught 10 passes for 70 yards. The running game, as I said before, had flashes of greatness with one play in particular having Josh Smith get a great block launching Jalen Hurd into a 22 yard run down the sideline which was just what Vol fans have been wanting all season. 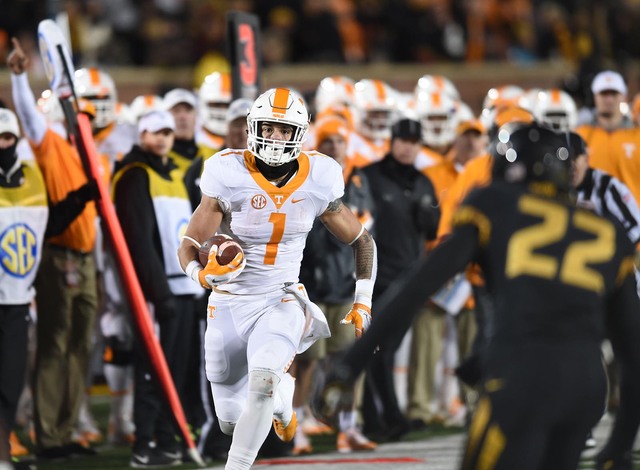 Hey.. new concept to consider! Have a blocker for Jalen Hurd and Alvin Kamara. Just saying!

One of the biggest disappointments of the game was seeing the Tennessee offense run over and over again a screen pass play which everyone, including fans and Tiger’s defensive coordinators, saw coming and Josh Dobbs’ slow development of the play led into negative yardage after more negative yardage. 2 plays that have been poorly executed all year long when you add in the “fake” option running play. Both plays should be ripped out of Mike DeBord and Butch Jones’ playbook and BURNED!!!!

OK, so I know this post has been mostly negative which is somewhat unfair to Butch Jones and the Vols. Jones has gotten top recruiting classes and is slowly turning this team around despite my or vol fan’s impatience of our program. Tennessee is now 7-4 and could finish 8-4 with a good bowl game showing us that this program is going in the right direction and we should pump our brakes a little and give Jones the time to build this program his way. We were picked to win the SEC East by many sportscasters and were 1 play away against Florida giving us that option. We have been way more competitive against big game opponents since 2006. I believe in Butch Jones and his vision for the Tennessee football program and believe he can get us back to SEC prominence. Yes, we have a lot to work on and we have youth on our team which can easily give us some contention in future seasons but Butch Jones will get us there if we let him. 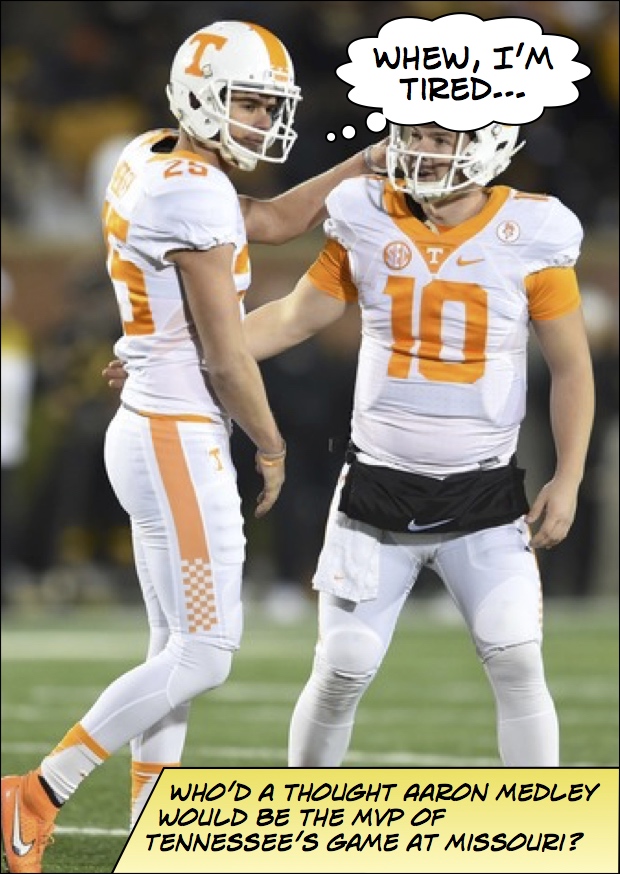 One side note to this article is the performance Aaron Medley. He’s been woefully inconsistent all season long and in this game we ended up depending on him for Tennessee’s success. Aaron came through for us kicking 4 out of 5 field goals accounting for 13 of the 19 points Tennessee held on to for the win. As well as Trevor Daniels who kept Missouri deep in their own territory allowing Tennessee’s defense to keep them there and force punt after punt during most of the game.

Everyone called for Medley’s benching and Butch Jones said they were sticking with Medley as our kicker. Vol fans weren’t happy but the confidence in Medley from Coach Jones has started to show improvement by Medley.

Congratulations for being MVP of the game! 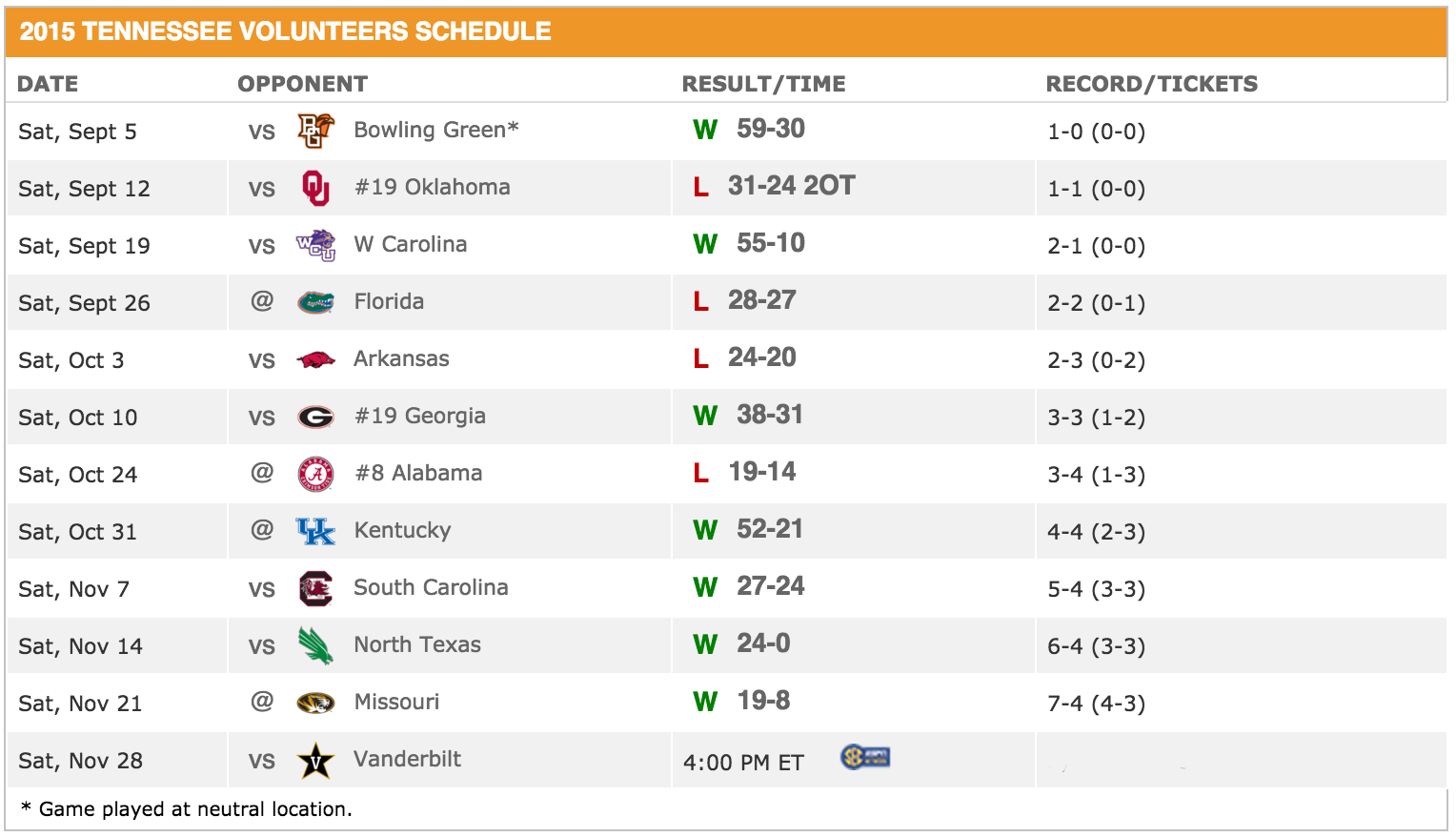