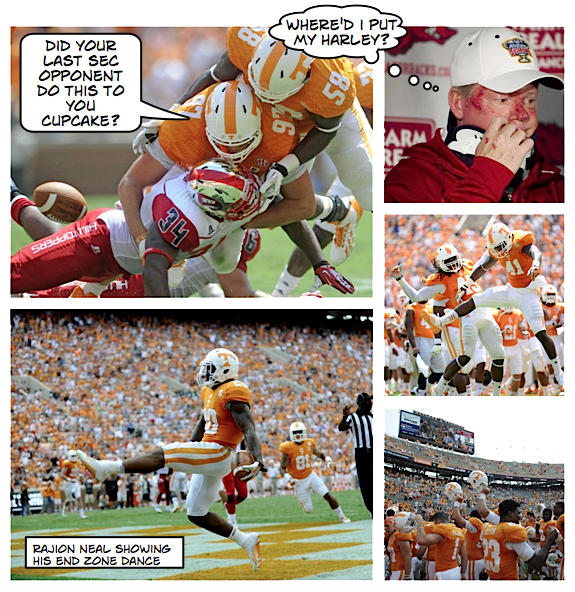 For the past 2 years the Vols have started at 2-0 before the right front wheel falls off causing a tailspin into the SEC schedule.  This year may be no different as the Vols easily dismembered both Austin Peay and Western Kentucky just before driving across their first speed bump which includes two away games at #2 ranked Oregon and #12 ranked Florida.  If you were flipping channels yesterday you would have seen the Ducks completely dismantle the Virginia Cavaliers and Florida losing to unranked Miami Hurricanes. Which would obviously leave Vol fans nervous as our success level against Florida, in the swamp, has not been great and our last meeting with the Ducks ended in a 48-13 embarrassment to Derek Dooley and his staff.

Vol fans, who have been complaining about our recent experimental 3-4 defense from Sal Sunseri, now cheering about the return to the 4-3 have been lighting up the message boards that we should now abandon the 4-3 in order to compete with the Ducks.  I’m not sure I understand this philosophy.  It would be a great boost of moral to our program to be able to compete with the Ducks and move into our 4th game against the Gators with an improved chance to win, flip flopping on our defense schemes I’m not sure would help us accomplish this.

Worley and the offense will have to be running on all 6 cylinders and have no hiccups for the next two games.  This seems unsettling since a 59-20 win over WKU was followed by Worley stating he wasn’t in sync with his offense for inexplicable reasons.  They certainly looked good against non-threatening opponents but could sputter out quickly against the Ducks and Gators followed by our usual brutal SEC schedule which includes Georgia, South Carolina, @ Alabama, @ Missouri, Auburn, and the usual finish of Vandy and Kentucky whom have both beaten us within the past two years.

While it looks like we might be headed in the right direction, we have taken the same wrong turn for the past 5 years and I would be foolish to let my optimism run high given this history.  I fully expect a loss against both the Ducks and Gators but certainly would be elated to have Butch Jones and the Vols show my I’m an idiot for thinking this way.

Never the less, I’ll still be sporting my orange regardless and hoping this time my excitement for our team won’t get let down!