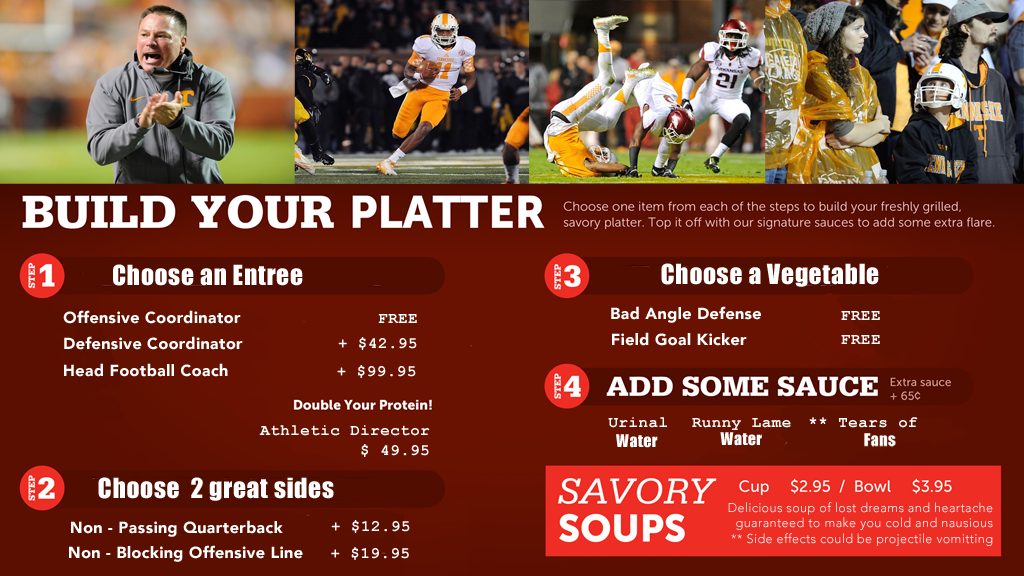 As if the heartbreaking loss to Florida by yet again 1 point didn’t upset Vol fans enough, they were looking for a bit of reprieve facing the Arkansas Razorbacks who were 1-3 and looking like a trainwreck in their past two game. Dubbed the “desperation bowl”, everyone was saying this was a must win for both teams to show some progression in their programs. As usual, Tennessee jumps out to an early lead starting with a kickoff return by Evan Berry. Everyone has watched as Tennessee blow double digit leads in the fourth quarter but in this game the Vols decided not to keep fans waiting until the fourth quarter and blew their before halftime.

With absolutely no offense, a quarterback who seeming can’t do anything but hand the ball off or run himself, and an offensive line who can’t run or pass block, it was easy for the Razorbacks to get the lead and hang onto it giving Tennessee its third loss of the season and second loss in SEC play.

Early hype surrounding the Vols may have been severely premature as the Vols seemingly are digressing as a football team rather than progressing. Again watching Josh Dobbs not be able to establish a consistent passing game and Tennessee’s defense unable to get the right angles and make drive stopping tackles have sent Vol fans further into the “fire Butch” movement. 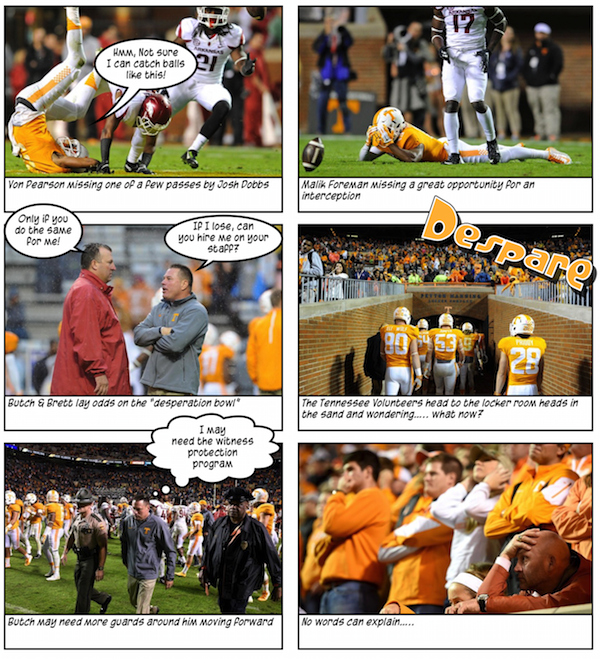 Moving forward into games against Georgia and Alabama, the predictions of Tennessee’s wins this year are fading as the Vols look to be a 7-5 team at best. With no offense, a soft defense, a quarterback who can only hand off or run, the Vols could easily find trouble in the latter part of their schedule. Having Arkansas look like a completely different team against the Vols casts shadows on Kentucky, South Carolina, and Missouri starting on Halloween (more curses coming?).

The past two games are putting the blame squarely on the coaching staff. Butch Jones stating he welcomes the criticism and has “square shoulders” I’m not sure he understands that SEC pressure is a much larger deal than any pressure from the Mid-American Conference and American Athletic Conference. Does he deserve it?     YES, He does. 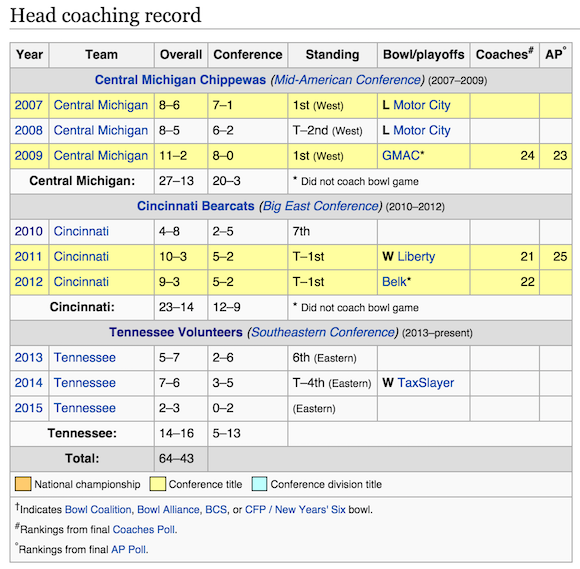 The SEC is the premier conference in college football and require a whole new level of coaching ability and understanding in order to be successful. Whether Butch Jones knows this or not, he has not but a formidable opponent on the field against Oklahoma, Florida, and now Arkansas shows clearly that the coaching staff can’t “walk the walk”. Adding insult to injury of press conferences which bring back the haunting ones of Derek Dooley where he was about to cry. Yes, Jones has been successful in his previous coaching stints but does that make him SEC material?  I don’t think so. Butch is going to have to learn that motivational speeches will only get you so far, the rest HAS to be shown on the field.

What needs to change?

I hate to say this because Josh Dobbs is an excellent young man but it just isn’t working with him in the huddle. Cringing forward to the Georgia and Alabama games, I’m almost to the point of putting Dormady in for the hell of it and see what a pocket passer can do. Yes, the Vols are a little banged up on the receiver end but we have enough depth at those positions to put together successful drives. Maybe Dormady would breath some life into a dead and buried offense. Something has to be done now! Tennessee can’t continue to fumble its way through the SEC and change from being an early East Division winner to again the laughing stock of the SEC.

With Josh Dobbs hovering around a consistent 50% quarterback rating, Quinten Dormady may be our only chance to salvage a season gone south. Even though his time in the huddle has been severely limited, he has been successful during that time and made Mike Debord change the offensive game plan to included a pocket passer, which has worked in its limited time.

Besides that, they’re is not right answer for how to fix such ineptitude infecting the Vols. Gutting the coaching staff is not the answer and will only set the program back another five years or more but finding the right fit for Butch Jones and his recruiting classes is a MUST and needs to be done at the end of the season. 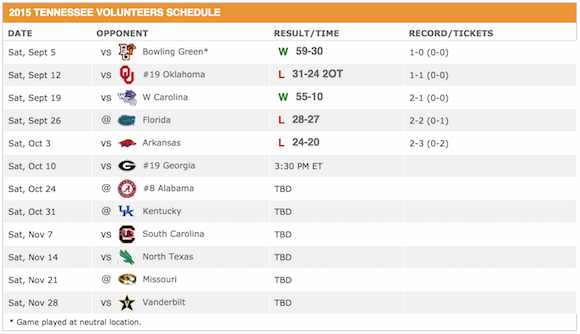