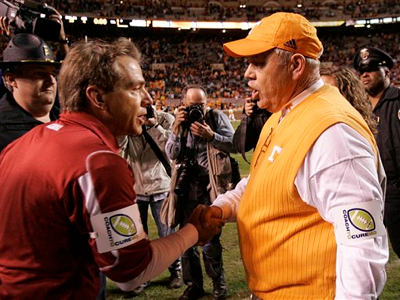 Now, Alabama is the one hard game that all Vols fans demand we DON’T LOSE!!!  It’s been one of the longest standing rivalries in the SEC and between the two programs.  Nick Saban has done an amazing job turning around the Bama team in very little time (1 year) and coming into this game, most Vol fans have already seen the writing on the wall….

Tennessee did stand a chance against Alabama, they have not finished any of their games well.  Their second half play has been just to hold on whatever lead they had built during the first half of the game. But, as with the whole season, Tennessee can’t seem to get out of their own way.  Penalties, Turnovers, and an offensive gameplan that doesn’t look like it could compete in the AA division all leads to one thing….. more losses!!!

Tennessee fans, players, and especially the coaches don’t deserve this type of performance.  You have to hang the blame somewhere but the program looks like a systematic problem.

Will Tennessee ever be competitive again?  YES!!

« ESPN sees the writing on the wall Turnabout is fair play… »