Kiffin not treading lightly at Tennessee. 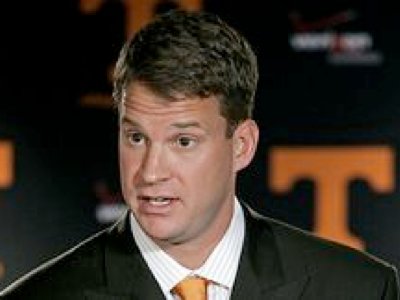 Say this for new Tennessee coach Lane Kiffin: He doesn’t mind stepping on toes, which just might be a prerequisite if you’re going to have any prayer of surviving in the SEC recruiting wars. Already, Kiffin has drawn the ire — in some way, shape or form — of South Carolina’s Steve Spurrier, Florida’s Urban Meyer and Alabama’s Nick Saban.

Among them, they have four national championships and 10 SEC championships to their credit. They’re also three of the guys Kiffin needs to beat on the recruiting trail (along with Georgia’s Mark Richt) if he’s going to return the Vols to elite status in a league that’s football’s version of a steel-cage match when it comes to wooing the best high school prospects. In other words, there’s no such thing as playing nice, which Kiffin says is the biggest difference between recruiting in the SEC and recruiting in the Pac-10.

My biggest shock has been the things other coaches say,&quot; said Kiffin, who has reunited with his old pal at Southern California and one of the most renowned recruiters in the country, Ed Orgeron, to give the Vols a brand new look. You go in behind some of these coaches and hear the things that a coach has said about you, and it blows me away. I would think that you’re confident enough to sell your product instead of worrying about us so much. It’s surprising, especially since we haven’t been here very long. We didn’t win very many games last year. I wouldn’t think people were very worried about us, but it sure seems like they are.

His critics insist the 33-year-old Kiffin is way too brash for a guy who hasn’t proven anything as a head coach and that he has no idea what he’s about to get himself into in the SEC. His supporters insist that he has exactly the kind of bravado and moxie that it takes to go head-to-head against the who’s who lineup of head coaches in the SEC.

Either way, it’s obvious that a new sheriff is in town in Knoxville, Tenn.

No question, there’s a buzz out there,&quot; said Orgeron, who will serve as Tennessee’s recruiting coordinator and also coach the defensive line. It’s a buzz that started on Dec. 1 when Kiffin was introduced as the Vols’ new head coach, replacing 17-year veteran Phillip Fulmer, who was forced out. While talking about how eager he was to embrace the Tennessee traditions, Kiffin said one of the things he most looked forward to was &quot;singing ‘Rocky Top’ all night long&quot; after beating Florida next season.

A little bulletin board material, though, quickly became much more when a perturbed Meyer let it be known several weeks later that Kiffin had better cool it on any inquiries to Florida receivers coach Billy Gonzales with the Gators preparing for the FedEx BCS National Championship Game.

It was also about that time that Spurrier and Kiffin traded a few barbs.

The Gamecocks accused David Reaves of going after players committed to South Carolina and trying to sway them to Tennessee while using a South Carolina-issued phone. Reaves, Kiffin’s brother-in-law, was the recruiting coordinator at South Carolina before joining Kiffin at Tennessee and denied those charges.

Spurrier also wondered aloud if Kiffin had even passed his recruiting certification test and was allowed under NCAA rules to be calling recruits. Kiffin responded by guaranteeing that he scored higher on his test than Spurrier.

Things only heated up once January hit.

Kiffin first made a play for Georgia’s top recruiter, Rodney Garner, and offered him $400,000 to join the Tennessee staff. Garner elected to stay at Georgia.

And then last week, Kiffin went after Alabama’s top recruiter, Lance Thompson, and didn’t come away empty-handed this time. Two weeks before National Signing Day, Thompson jumped ship to Tennessee for a big raise, prompting Saban to do two things. First, he hired James Willis away from Auburn in Kiffin-esque fashion to replace Thompson, and then reportedly told a couple of prospects committed to the Crimson Tide that he didn’t want them visiting Tennessee. There’s so much information out there. But I will say this: The tougher it gets, the more we like it,&quot; said Orgeron, well-versed in the SEC recruiting wars after spending three seasons as Ole Miss’ head coach from 2005-07.

That’s why we’re here. That’s the reason I came out of pro ball. In pro ball, you have one first-round pick. At Tennessee, we can get perhaps six or seven.

Orgeron, who lives, sleeps and breathes recruiting, is Kiffin’s most important recruiting catch to this point. After spending last season on the New Orleans Saints’ staff, Orgeron was being courted by both LSU and Tennessee. Several of Orgeron’s close friends in Louisiana were convinced that he was going to wind up at LSU. Kiffin, though, wasn’t about to take no for an answer. He’d already scored his father, Monte Kiffin, from the Tampa Bay Buccaneers for $1.5 million to run his defense at Tennessee. The other centerpiece of his staff was Orgeron, whom the younger Kiffin says was an even more important piece to the puzzle than his dad. If it was the NFL, I wouldn’t say that,&quot; Kiffin said. &quot;I’m saying that because of the recruiting side of things. I can be somewhere else, and I know what’s going on in the recruiting meeting that Ed’s leading. I can be on the other side of the country recruiting, and I know what’s going to go on when he’s down in Florida recruiting or wherever he is.

He’s the only guy in America at all that I have that kind of confidence in. Nobody else I’ve ever worked with knows exactly what I want like Ed does. The Kiffins solidified the deal with Orgeron during an impromptu trip last month to Destin, Fla., where Orgeron was vacationing with his family. Lane knew it was close between LSU and Tennessee and had been working Orgeron’s wife, Kelly. He told her that he and his dad were coming to see Orgeron face-to-face, but asked her not to tell Orgeron.

When they arrived that day at the condo, Orgeron was standing out on the balcony of the top floor and saw the Kiffins before they saw him. He started bellowing in his deep baritone twang, & I knew ya’ll were coming. I could feel it. I just knew. The Kiffins got on the elevator and were greeted at the door by a smirking Orgeron. We had this whole plan to sell him on and why he needed to come to Tennessee,&quot; Lane recounted. &quot;But he meets us at the door and says, ‘Before ya’ll start, I don’t care what you’re here to say … I’m coming.

Orgeron will earn a cool $650,000 at Tennessee. The nine on-the-field assistants will be paid a total of $3,625,000 this year — more than any other staff in college football. But it’s also a staff that Lane Kiffin says unabashedly can offer recruits something that no other staff in America can match.

You’re getting Tampa’s defense, and instead of waiting until you get to the NFL, you’re going to get coached just like the best players in the NFL, he said. And the offense is the same offense we ran when I was at Southern Cal, an offense that’s been dynamic and has put a bunch of players in the NFL and gotten a number of players drafted higher than they would have been if they had gone somewhere else.

We’re going to put you in a position from a football standpoint that when you’re done playing in three or four years that you’ll be better prepared than you will if you had gone anywhere else in the country, and I’ll argue that with anybody.

Sit back and enjoy, because one way or the other, this ought to be fun.