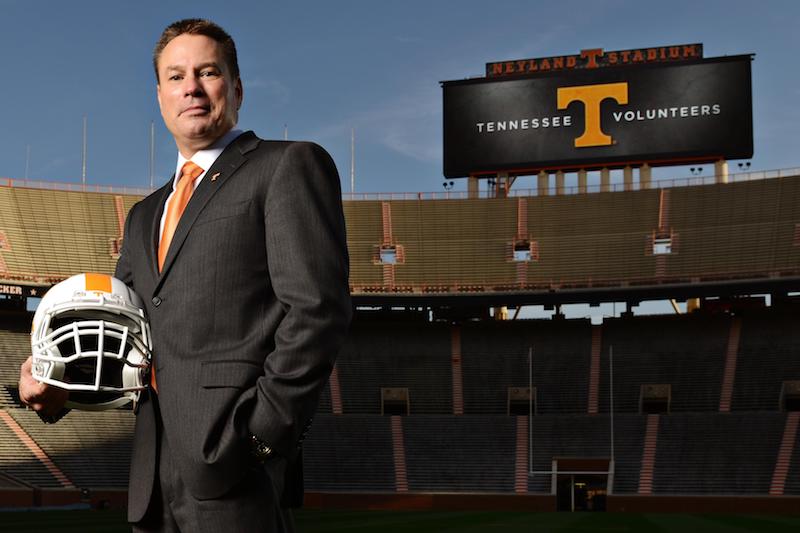 We the people of the Free State of Jones do hereby decree the following:

1… We shall, to form a more perfect program, establish various sayings to which most outsiders will not understand but will have to accept our creed if petitioning for inclusion.

2… We shall be vested in a program at the University of Tennessee, which will consist of untimely and inexplicable losses throughout the college football season.

3… No person shall represent the coaching staff of the Free State of Jones without first having completely their G.E.D. or similar education.

4… When vacancies happen to our coaching staff, we reserve the right to replace said vacancies with similarly or lesser qualified staff.

5… We shall have the ability, without reprieve, to establish poor play calling abilities during key moments within any football game and reserve the right thereof to offer no real explanation or accountability of ourselves for any such play.

6… We shall establish the Free State of Jones as a mid-tier SEC union and shall not strive to better ourselves during the course of our existence.

7… The Free State of Jones shall build up its recruiting coffer to give the false appearance of a state capable of taking over competing states but we shall never actually use said coffers for such activities.

The State of Jones is at a very pivotal point in its existence. With 5 years in and a bevy of good recruiting, Jones has been unable to establish Tennessee’s dominance in the SEC East which is causing a lot of dissension among Tennessee rank and file fans. Those who were not big proponents of the hire want him gone yesterday, those willing to see what he can do have realized it might not be much, and those who loved the hire are sitting on their couches crying into their bowl of popcorn asking “WHY?”.

There’s no denying that Butch Jones is a great recruiter, we’ve seen that since day one. With consistent top recruiting classes, Jones has brought in the talent for sure. Now what he’s been doing with that talent is suspect as we have seen flashes of greatness on the field, flashes of flops, and indicators that way more development is needed. One could question Tennessee’s strength and conditioning program as each year we seem to be plagued by substantial losses of great and talented players.

Make fun of Butch’s mantras all you want or “butchisms” but they resinate with the players at a level that has produced a team unwilling to quit on their teammates or coach. While the fans may poke fun or express outrage, it works for the purpose it was intended… Firing up the team. This is something Tennessee fans have not seen since the Fulmer days and is a welcome site. There’s only one problem with that…..

Butch doesn’t believe in his on mantras!

Or at least doesn’t coach by them. D.A.T. – Details, Accountability, and Toughness.

We’ll start with Toughness because it’s the easiest. There is no question that this part of the acronym has been fully adopted by the players. They play until the bitter end and hard enough so their heart can not ever be questioned. At the risk of even season ending injuries, they play! Despite the scoreboard, they play!

Details is one that escapes me. Exactly what details are we referring to? Details in the player’s preparation, details in a player’s assignments, details in a player’s awareness, or is it something else? What we do know is that DETAILS are being missed and you can’t pin this on the players. Details is the one thing of DAT that Butch Jones has left out of his coaching ability. Nothing was more apparent then the recent Tennessee / Florida debacle. The game was littered with poor coaching decisions on both sides of the ball but more so on offense than anything. Changing your kicker during the game resulting in 3 missed field goals, calling 3 consecutive pass plays on the 1 yard line when you have a running back that could of scored stinks of bad details in your gameplan against what would be argued a truly lesser opponent.

Now on to the main event…. ACCOUNTABILITY!

While Jones may hold his players accountable for their practice effort and game play, the last thing he will do is allow himself to be held accountable. Press conference after press conference is peppered with excuses, coach speak, and even a little lie or two. Nothing more evident than his press conference following Florida. Jones deferred to some “alternate” way of thinking with the play calling during the Florida game, which any other coach would of done completely different in certain situations. Butch would have none of that. A smart coach would of been the first to own it and say “It all falls on me” but that is not even close to Butch’s response. All coaches, at one point or another, suffer from the same affliction of the dilution that they can talk their way out of a clear blunder. Jones should ask for a refund from his therapist for treatment of this affliction because it is progressing into a dangerous level. One that could very well cost him his job!

However, I find myself in a curious spot of Déjà Vu. Asking myself, as I did in the Fulmer Days, is this Jones or Jones’ coordinators? Last year I was quite critical of Mike DeBord and his play calling and thus happy to see him leave only to see the same, if not worse, calls by Larry Scott. That would prove, at least on the surface, that this is a Jones issue. Either he is dictating poor play calling to his coordinators or he is lousy at bringing in the right coordinator. Either way, Butch is going to need a lot of lucky rabbits to make it through this season and, if so, he’d better start finding the right guys for the job before Tennessee’s AD does the exact same thing.

Do you really need to have coach’s back when he’s covering his own ass?

« Curb your enthusiasm Out of Bricks! »