ESPN sees the writing on the wall 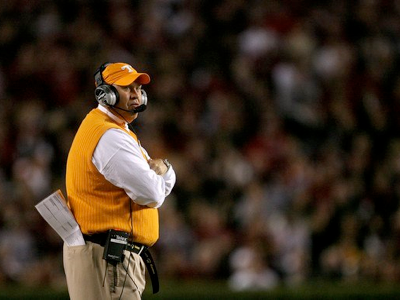 How bad is it: Ugly. The Volunteers have failed to score more than 14 points four games in a row. Fulmer could be staring at a second losing season in the past four years, and it’s hard to believe that would be tolerated — despite the mystifyingly enhanced contract Fulmer received during the summer. As it stands, if Tennessee somehow pulls out of this 2-4 tailspin and wins eight games, he’ll be awarded another year on his contract, which would be flat crazy. Low point: The season-opening loss to UCLA was a disaster, since everyone knew the Bruins were at best average and the rest of the early schedule was brutal. Chance of a turnaround: Like Tuberville, Fulmer has pulled himself out of tight spots before. But anything short of winning out (including beating Alabama) will still leave a lot of ammunition for his critics. Last word: From Ron Higgins in the Memphis Commercial Appeal: So here’s a question for Tennessee athletic director Mike Hamilton and all the Vols’ deep-pocket boosters. How long does this mess have to go on before you realize that Phillip Fulmer isn’t going to raise this sunken ship from the bottom of the SEC East?

Are Fulmer and his staff worse as coaches than they were at the start of this decade? Probably not. But Tennessee’s recruiting has been on a downhill slide for several years, and it’s showing up big now, especially with the addition in recent years of aggressive recruiters such as Alabama’s Nick Saban and Florida’s Urban Meyer.

You can’t fool the consumer. There are vast amounts of empty seats at the nonconference home games. And check the message boards. Even the fans who like Fulmer personally are almost apologetic when writing they’ve lost faith in him and his program.