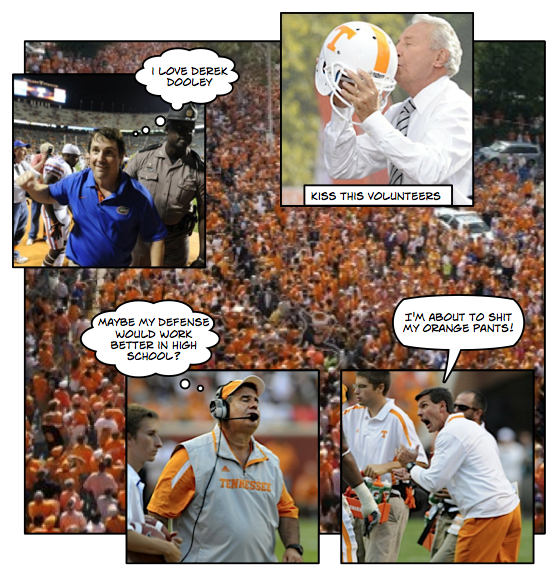 For the first time in several years, excitement had reached the level impatient Vol fans had been waiting on and drawing ESPN’s College GameDay to the University of Tennessee campus for an early battle royale with Tennessee’s recent nemesis the Florida Gators.

Derek Dooley and the Vols kept fans in the game for the first half playing the kind of Florida vs Tennessee matchup that was worthy of the attention.  Just like every good story, it has a dark side and this one was titled “2nd half” as the Vols came out after halftime looking like a Division II school Florida booked for homecoming.

Florida quickly running away with the game in both 3rd and 4th quarters making Tennessee players look completely unprepared for this game and causing a black hole funnel from the stands as the life of the fans quickly got sucked away.  What started out as a season of hope, being Dooley’s 3rd year and sentiment that the team’s play would eventually catch up to the sales pitch Dooley had been giving fans since his hire.

With the rest of the schedule looming and the alway infamous October schedule, Vol fans certainly have reason to be concerned about another losing season…..