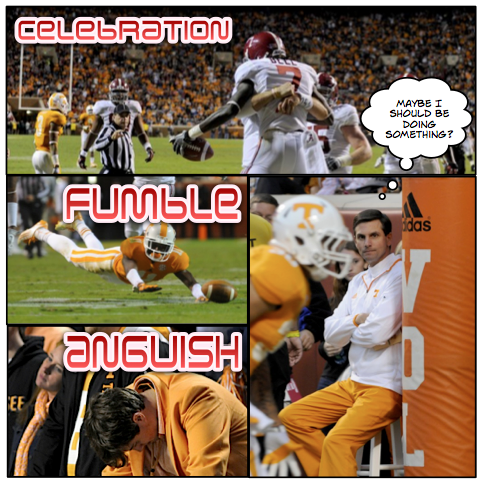 There are stages to almost everything these days.  The most commonly used when in any discussion is the stages of grief following the death of a loved one.  Some stages can last months or years or some, as in this case, minutes!  The 3 Stages of Bama brought an end to the Vols hopeful 2012 season. Even with 3 losses already on the books to Florida, Georgia, and Mississippi State, Vol fans still clinged to hope that there was some salvation near.  That perhaps we could, from the depths of despair, conjure up enough strength and fortitude to match wits with a worthy opponent.

The trouble with this thought process, however, is that worthy opponents this year have come in the forms of NC State (possibly fluke), Troy, and Akron.  Hardly challenging opponents to any SEC team but seemingly able to score points on the Vols.

What took place on the field inside Neyland Stadium, Vol fans would wish to forget quickly as the Crimson Tide made a mess of the Volunteers and stripped fans of any hope we had left in a winning season as well as any remaining faith in the smooth talking Derek Dooley.  Now fans, who had been vocal upon his hiring, began to rise up in a great big “I told you so” quickly starting the “tide” (forgive the pun) against former Louisiana-Tech Coach and Athletic Director turned SEC Head Coach’s departure.

Can Derek Dooley fix the Vols?  No, I don’t believe he can. He would seem to have a better fit among an athletic programs administration than a head coach.  The forever puzzling quarterback Tyler Bray seems to be almost zombie like under Dooley’s coaching.  The zombie effect slowly spreading to the entire team and fan base.

It is certainly understandable that you have to give a coach time to develop his team, especially one who followed one of the possibly biggest cluster fuck’s of Tennessee’s history with the hiring of The Weasel but even with the recruiting classes that followed Fulmer’s last years, Weasel, and Dooley, fans expected a much better team and, in no way, expected a sub .500 team.

DOOLEY….. GET THE HELL OUT OF OUR PROGRAM

« Corso’s Kiss of Death No Parlay from the Commodores »