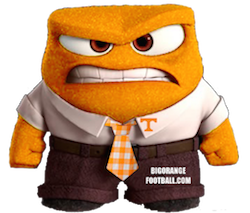 Welcome to my Blog!  Yes, another “Blog”! I started this blog in 2008 because I had grown very tired of the state of Volunteer football and wanted to proudly voice my opinion.

I came to the University of Tennessee in 1990 and really had no idea what was in store for me.  I grew up in the New River Valley in Southwest Virginia, which in recent years has been recoined as Hokie Country.  During my time as a kid going to Virginia tech games left much to be desired.  Touch mini football games in the grassy outdoor entrance to Lane Stadium was the highlight to Saturday afternoons compared to what was going on inside Lane Stadium.

Granted, at this time I was in no way a college football fan.  I just didn’t see the point.  I looked to Sundays when I could watch real games in the NFL and root for either my Cowboys or Falcons.  (I changed to Falcons when Roger Staubach retired).

I then attended a Junior college with plans to transfer to a major university.  Much to my family’s dismay, Virginia Tech was not one of my choices.  I applied and was accepted to several schools but kept being drawn to a city name Knoxville.  Upon visiting Knoxville and the University of Tennessee Campus, I was immediately struck with how friendly everyone was as well as the size of the Tennessee campus (practically the size of my home town!)

My enthusiasm for Knoxville and Tennessee came to an immediate halt when I realized that I had no chance of finding news or scores on pro football games, or college football games that didn’t involve Tennessee.  News, Papers, Radio all spewed non-stop Vol talk driving me into a frantic withdrawl.  Frustrated to the point of a nervous breakdown, I began pumping in my local and national newspapers to get my fix for football information that wasn’t all VOL.

Finally, one Saturday afternoon, I decided that sitting in my apartment flipping through channels of Murder She Wrote reruns was not for me.  I got dressed, walked into the street and followed the orange masses filling into the center of campus towards the football stadium.  Walking up the the stadium was in of itself surreal.  I stood in amazement as I saw nothing but probably 40,000 people all dressed in orange and ready to party!

I gave the attendant my college student ticket, at which point she directed me to the concession stand and said to me “get you an orange shirt boy!”  I did as I was told and filed into the upper deck student section of what was called Neyland Stadium.  I looked around at what was an estimated 95,000 fans and was absolutely astonished and the scope of what I thought to be a simple boring college football game.  Soon the 95,000+ fans became alive and the game began.  By the second quarter, storm clouds starting moving in for the stadium.  Soon a monsoon was on top of us and, amazingly, no one moved, no one stopped playing, no one cared.  I remember vividly seeing the sidelines filled with water up the the players shins and still no one stopped! The party and game only intensified.

Yes, I was actually in the middle of an actual football game and I was pumped.  A 45-3 drubbing of the Florida Gators, the sea of orange, and a seemingly cool tune called “Rocky Top” had me enthralled.  The game ended and I made it back to my apartment, turned on the TV and couldn’t wait until the news came on to talk about the game.  It was obvious, one game and I was hooked!!  3-4 games into the Vols schedule and I know longer cared about Pro football, no longer was interested in my home town team, was skipping classes to stand in line for tickets to the next game, and wearing nothing but clothes of a pumpkin-like color!

Fast forward over a decade, a national championship, and recent decline in the program gave me the call to arms in covering the University of Tennessee football program.